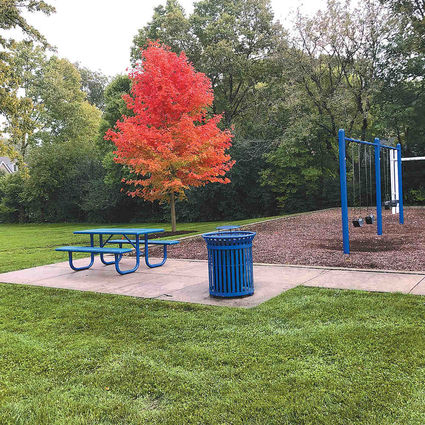 Louis Lamoureux and his wife, Marian, donated a tree in Dietz Park in honor of their son, Paul, who died in 2016 of a heroin overdose. This photo, from October, shows its beautiful fall colors. (photo courtesy of Louis Lamoureux)

Louis Lamoureux knows statistics can be difficult to put into context - especially when it comes to the loss of human life.

But he's shared one that makes people take notice.

"Four people within a few blocks of my home died within two years from opioids," Lamoureux said.

One of those four individuals was his son, Paul, who overdosed on Aug. 31, 2016, after a long period of sobriety, Lamoureux said. Paul was 24.

"The closer you get to home - it's interesting - the more power the statistics have. The appreciation of the pain that it causes can't be there unless you witness it," he said.

Lamoureux hopes to help others understand more about substance use disorder through his novel, "Granville Street."

"The character Adam in my book is modeled after Paul," he said. "Some things that happen to Adam didn't happen to Paul and lots happened to Paul that's not in the book."

One thing his son and his character share are repeated efforts to stay clean. Both were in inpatient rehab seven times. Lamoureux said he's done a lot of research into addiction and come to understand how strong the pull of substances like heroin can be.

"When you do something that is good for survival, your brain releases dopamine and tells you, 'That was very good. You must do that again,' " he said.

Drugs like heroin release a flood of dopamine that overwhelms the brain.

"Even when you are no longer physically dependent, your brain remembers 'You must be doing this.' "

In the novel, Adam receives Vivitrol to help with his addiction. Paul also was taking a prescription to help him overcome his addiction, a drug called Suboxone.

"I'm a big proponent of medically assisted treatment," Lamoureux said. "I believe people need that assistance - or most of them do. If people can get through without it, it's absolutely fine, too. It should not be discouraged in my mind."

Lamoureux also created a character modeled after himself, a lawyer named John. When the novel opens, John has little compassion for people with substance use disorder, but his perspective changes.

"I kind of went through that transition," Lamoureux said, adding that he is not surprised people are perplexed by the choice to use.

Lamoureux said it took about a year after Paul's death for him to consider the project.

"I actually started thinking we should put on a musical. With the exception of me, we're a musical family," he said.

Daughter Melanie and son Carl suggested he write a book first. And so he began learning how to craft a piece of fiction.

"I studied writing for about a year," he said. "I took a lot of online courses and started formulating the plot and got some help from professionals about putting a plot together."

A consultant, he found himself writing in the evenings and on weekends of his business trips. The book took a little over a year to complete.

"It was very emotional," he said. "It was interesting. It was an opportunity to funnel my emotions into those writing periods of time."

The self-published book was released in October.

"My objective in writing it was to shine light on the stigma that addicts and their families face," he said. "Things have progressed a lot in a positive way since I wrote the book and Paul died. The world is a lot different now than it was. It still needs to get a lot better, but it's far different."

Good Samaritan laws that prevent police from gathering evidence at the scene of an overdose are a positive step, Lamoureux said, and he praised the cooperation between the DuPage County Health Department and Sheriff James Mendrick to offer Vivitrol to jail inmates.

Lamoureux now is focusing his efforts on the business community, with the goal of creating workplaces that are more friendly to those in recovery - similar to what Gov. Chris Sununu has done in New Hampshire. Lamoureux has formed a new company, Recovery Friendly Workplaces Inc.

"I've assembled a group of HR specialists - some of them are in recovery themselves - who are experienced looking at things like drug and alcohol policies and employee assistance programs."

And he hasn't given up on his dream of seeing "Granville Road" performed on stage.

"I'm hoping somebody who knows musicals will discover this and say, 'Let's make a musical out of this.' "