Helping in the healing

Exploration of a pharmacist's life kicks off series on careers 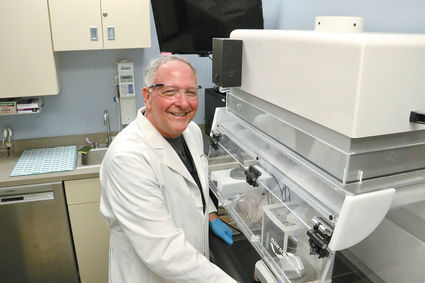 Pharmacist Steve Hiemenz opened Elm Plaza Pharmacy in 2001 at 908 N. Elm Street. Packaging pills is still a big part of the job 20 years later, but he said providing personalized care has become a much more significant dimension of his practice.

Hinsdale pharmacist Steve Hiemenz said his professional paradigm has less to do with pill dispensing and more to do with patient management. And that's just fine with him.

"My ultimate goal as a pharmacist is to work in a pharmacy that doesn't have any medications on the shelf," he said.

Perhaps that will be reality one day at Elm Plaza Pharmacy, which Hiemenz opened nearly 20 years ago in the medical building at 908 N. Elm St. His day typically starts around 6 a.m.

"I go through and look at the prescriptions I have staged that are due for today," he said.

Each day the pharmacy prepares about 100 prescriptions, he estimated. As expected, containers of medicine line the shelves behind the counter ready to be packaged. He said special trays organize pills for those with multiple prescriptions or with more than one daily dosage.

"Very few people remember to do anything three times a day," Hiemenz said. "You've got to get to know your patient and find out what works for them and what's not working for them."

For refills, instead of waiting for the patient to call it in, pharmacists take a more proactive approach to promote follow through.

"What we're trying to do now in the world of pharmacy is to try and keep people more compliant, more adherent to their medications, make sure they're taking them correctly," he said. "We kind of try to drive the bus."

That follows a general shift in the profession to more personalized service.

"Now it's become more of a relationship-based thing, which is pretty cool," Hiemenz related. "I'm really starting to see the pharmacist's role be more defined. It's very little to do with dispensing now and really much more to do with patient care and managing the entire medication process."

One of the ways he extends that care is through compounding, or making customized medications to meet specific needs. They compose a relatively small percentage of his workload but can make all the difference to the patient. He shared the case of woman who was unable to take regular prenatal vitamins due to her severe allergies.

"We broke the vitamins into what she really, really needed, and we compounded a capsule that she could take without any allergens in it," said Hiemenz, showing the high-tech machine he uses for the tasks.

Now the mom of three, she was effusive in her gratitude.

"She was in the other day, and she goes, 'You can't ever retire!' " he recounted with a laugh. "That's pretty rewarding. For every negative story you hear, there are two or three positive ones."

Hiemenz said he was drawn to health-related studies as college student.

"But I didn't want to be a dentist," Hiemenz quipped.

At his pharmacy school in the mid-1980s, he graduated after five years with a bachelor's degree, and patient contact was something of an afterthought. Now students take a six-year doctor of pharmacy program and learn customer care from the outset.

"Your first year you're interacting with patients," he said. "I think (today's students) are more prepared for the things that we're asking them to do now."

Those things could involve home visits, an increasing demand with a greater number of aging citizens that have mobility challenges. He teams with physicians to design the proper treatment - even when his pharmacy isn't filling the prescriptions.

"(A patient) heard that I kind of specialize in looking at patients' regimens and trying to make suggestions and optimize things," he said. "The older we get, the more medications we're looking at. And the more susceptible you are to the side effects of the medication, the more important it is to have people involved in your care process."

Another source of gratification is witnessing the evolution of medicine and the relief rendered to those suffering seemingly intractable ailments. He cited a new migraine medication as an example.

"I had one patient who told me she would spend two to three days every month in the hospital because of a migraine," he said. "Because this medication has been made available to her, she's well on her way to being migraine-free. She's getting days of her life back that she didn't have before."

Just then a gentlemen drops in to pick up his antibiotic prescription.

"One capsule twice a day," Hiemenz instructs. "Twice a day for 10 days. Make sure you take them until they're all gone. When I take this stuff, I like to have food in my stomach."

"I let them feel their own way but jump in and tell them what has worked for me," he said.

Hiemenz seems a bit taken aback at the realization he's in his fourth decade of practice.

"That's scary!" he remarked with a laugh.

And with 19 years at Elm Plaza, Hiemenz has watched children who once delighted at the counter lollipop jar grow up into parents getting medicine for their own families. He said the job is far more than putting pills in containers. 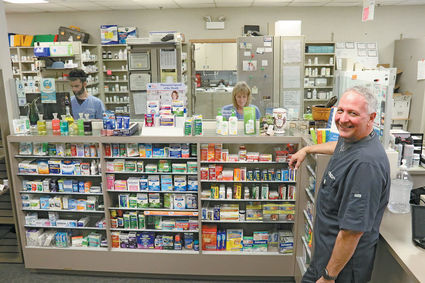 "If that's the relationship you have with your pharmacist, than you need to get a different pharmacist," he said. "I still have fun doing it."

Going to the neighborhood drugstore as a child was usually a mixed blessing. The candy selection was eye-popping, and the free suckers beckoned from the counter. But I knew that we’d also be getting something else for me to ingest, and it wouldn’t taste like a Dum Dum or a Twix.

So it was a bit of blast from the past stepping into Elm Plaza Pharmacy and seeing the sweets on the shelves, the lollipops jar and the friendly smile of neighborhood pharmacist Steve Hiemenz behind the counter.

Of course now there’s a lot more technology back there too, with computers, monitors and the fascinating compounding machine that enables Hiemenz to extend the personal touch to patients.

As someone who never entertained the notion of entering a health-related profession, I was struck by Hiemenz’ inclination toward the relational side of his practice. Clearly he’s instilled an inviting work environment that has kept assistant Jenny Thomas in his employ for 18 of the 19 years since he opened the pharmacy.

Could I have thrived as a pharmacist? Hard to say. But there’s a part of me that wishes journalists had reason to wear those sharp lab coats.

Education: 5-year bachelor of science from University of Iowa College of Pharmacy, has board certifications in pharmacotherapy and geriatric pharmacy

Biggest challenge: “The paperwork end of things and dealing with insurance companies and what they need to get a medication approved,” he said. “Sometimes people get frustrated.”