Security at a new level in District 86 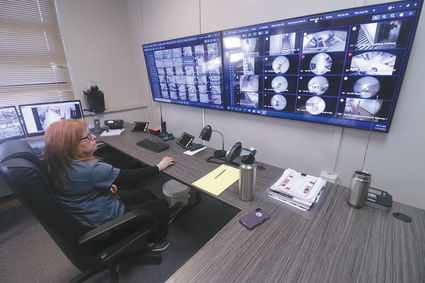 The second-floor room at Hinsdale Central High School looks like other administrative offices, with desks and computers and a Keurig machine.

But the command center has one unique feature - two 65-inch screens that can pull up as many as 36 views from the 150 security cameras in and around the high school.

In the year he has been on the job, Simpson has hired a team at Hinsdale Central and Hinsdale South that has more than 200 years of combined law enforcement experience.

"You can't put a dollar value on that and you couldn't train individuals to work security that have the background Tammy has as a commander in Oak Brook," Simpson said.

The cameras are monitored from 6:45 a.m. to 10 p.m. weekdays when school is in session (identical command centers exist at both campuses). Monitoring the video feed is one of the shifts security officers rotate through during the day. They walk the halls, monitor entrances and exits at arrival and dismissal, patrol the building's exterior by car and on foot and work special events, among other duties. They also spend time getting to know students.

"I don't have anybody who is running up and down the hallways trying to scare kids or intimidate kids," Simpson said. "They are building relationships."

District 86 Superintendent Tammy Prentiss said the fruits of that effort are evident when she's visiting the schools.

"They are interactive with our students. There are positive relationships. That's what you want first and foremost," she said.

Some of the security officers laid the groundwork for those relationships years earlier. Mark Keller is the retired school resource officer from Central, and Mike Coughlin taught countless Central students while they were in elementary school as the Drug Abuse Resistance Education officer for the Hinsdale Police Department.

"It's not some security guard sitting at the front door or sitting in the lunchroom talking to somebody. It's Officer Coughlin," Simpson said. "It's people we know who are invested in this community."

Former officers bring a specific type of experience to the position as well - 25 to 30 years of training on weapon use, retention and maintenance, Simpson said. Individuals who qualify for an Illinois Retired Officer Concealed Carry permit can be armed on school property. Simpson wouldn't reveal how many individuals on campus are armed at any given time. He noted that studies show an earlier confrontation with a school shooter results in an quicker conclusion to the event.

"It's not going to eliminate it - none of this is foolproof," he said. "We're trying to mitigate the risks that are involved to put the odds back in our favor."

Simpson points to the Starcom radio in the command center as another tool security officers can use in the event of a crisis. The radio is the same one used by all local police and fire departments.

"Tammy could be viewing real time information in the cameras and communicating directly with units that are responding," he said.

He and members of his team - Keller, Coughlin and Ed Rompa at Hinsdale South - are working to create a new emergency operation plan that incorporates suggestions from the DuPage County Regional Office of Education and will be used districtwide.

The strengthened security presence has had a positive effect on student behavior as well, Simpson and Prentiss said.

"I will tell you that the hallways when the bell rings are almost always empty and that was not the culture (previously)," Prentiss said. "Everyone seems to be where they need to be on time." 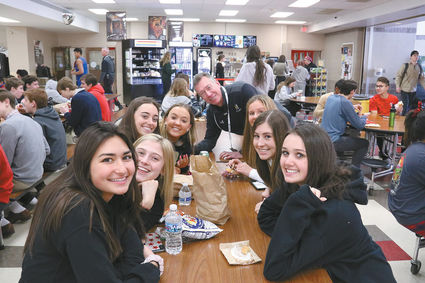 Simpson clearly is excited about the work he and his team have been doing and said other districts also are moving toward creating a separate security department.

"This is too much for an assistant principal or a dean to do," he said.

He expressed gratitude to the Hinsdale High School District 86 administration and school board for recognizing the need and making the investment in technology and personnel.

"At the end of the day, if something is to happen in the hallway at Central or South, I feel so much better knowing I have people who can address it," he said.

"You have people here who would be running to that threat instead of away from it."