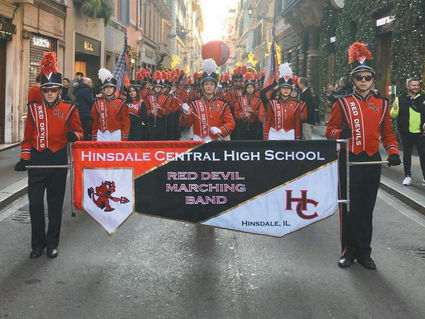 The Hinsdale Central marching band took part in the Rome New Year Parade on Jan. 1, performing in front of a quarter of million spectators to showcase their style of music for an Italian audience. Flutist Mia Gaddis said this is the closest the band gets to competing, "practicing a lot beforehand and really perfecting our craft to be able to convey a message to other people," she said. (photos provided)

All due respect to Audrey Hepburn and Gregory Peck, the Hinsdale Central marching band made its own version of a Roman holiday to welcome 2020.

The band traveled to Italy last month to perform at the annual Rome New Year Parade. Seniors Mia Gaddis and Lorenzo Jennings said they learned about the trip toward the end of last school year.

"I just lost it, I was so excited," said Gaddis, a flutist.

"I remember all of (last year's) seniors were so jealous," remarked Jennings, a percussionist, though that graduating class had journeyed to London as freshmen.

The group of 150 - including faculty and parent chaperones - left Dec. 27, making stops in three countries before reaching their destination. First on their itinerary were several mini stand-up concerts around the Rome suburb of Frascati, which was holding its New Year's Eve festival.

"It's a nice little town in the hills, very picturesque," said Central band director Matt Kurinsky. "There were three different places that we were in and did a 10-minute set in each. It was very fun."

Jennings said the setting was breathtaking.

"We got to perform in front of a really beautiful church. It was unbelievable," he said.

Among the pieces the band played were "Sweet Home Chicago," "Sleigh Ride" and "Fanfare for the Common Man," along with the Central fight song.

Marching bands in the U.S. are closely associated with football pageantry. In Italy, football is, of course, a different sport entirely, and marching bands are rare.

"The people are very interested in what we do," Kurinsky said.

Gaddis said they felt the love from their listeners.

"They were happy that we were there. We felt very appreciated," she said.

The Central band was one of dozens of international groups invited to participate in the New Year's Day parade, which proceeded through charming Roman neighborhoods and past some of the world's most famous sites.

"We were marching down the parade route, and we emerged from this street and we were right at the foot of the Spanish Steps," Gaddis recalled.

"They completely filled with people. I've never seen so many people in my entire life," Jennings added.

The estimated crowd size exceeded a quarter of a million people, likely boosted by perfect weather conditions. One of the fan favorites was the Red Devil mascot, who accompanied the band.

"He interacted with people in the crowd," Kurinsky said, joking that some were uneasy about taking selfies with a devil. Most were not, however.

"He was a big hit, People would pull him in for photos."

The mile-and-a-half parade ended at the Piazza del Popolo, where the band played a two-minute set.

"The streets were lined, similar to the Fourth of July in Hinsdale," Kurinsky said. "I think people were blown away, and we were just inspired at how responsive the crowd was. You really felt like a big deal."

Fortunately the group able to get some sightseeing in, making stops at the Colosseum and a taking an excursion to Pompeii. Jennings said the firsthand visits deepened his regard for the study of history.

"It is completely different to be there and visualize the actual places that (ancient) people lived," he said.

Gaddis said the immersive quality of the trip was profound.

"We definitely picked up some Italian. It was a musical experience and a cultural experience," she said.

Kurinsky praised the parents who came along to help manage the challenging logistics.

"The parent chaperones are he ones who make these trips possible," he said.

And it opened students' eyes to the possibilities of cross-cultural exchanges. 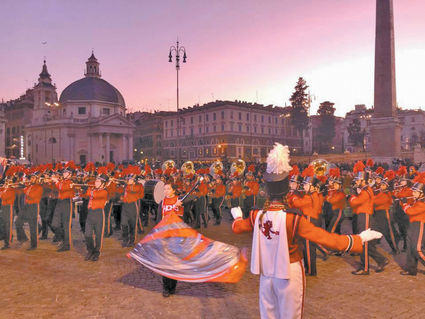