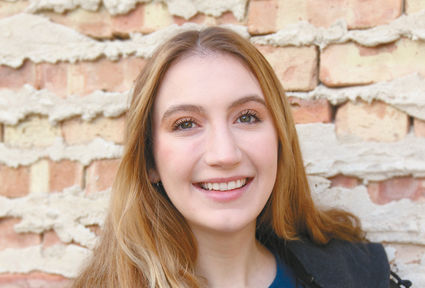 Gabrielle Roberts A 2014 GRADUATE OF HINSDALE CENTRAL • STUDIED MACHINE LEARNING THROUGH OXFORD AND STANFORD UNIVERSITIES • HAS AN OLDER SISTER, DOMINIQUE • SERVED ON EXECUTIVE BOARD OF USC'S TECH CONSULTANT FOR NONPROFITS

Living in southern California the last several years for college, and now for work, has left Hinsdale's Gabrielle Roberts ill-equipped for winter visits to her hometown.

"Definitely my blood has thinned out. I come home just in my sweatshirt from L.A. and immediately my parents have to give me a giant puffy jacket," Roberts joked.

Later this year, she'll be adjusting to an entirely new culture when she heads to Tsighua University in Beijing for a yearlong fellowship as a Schwarzman Scholar. Roberts was one of 145 selected from among more than 4,000 applicants for the August-to-July program, through which they pursue master's degree in global affairs while also gaining experience in their particular fields of interest.

For Roberts, that field is film.

"In the next two years, China is going to be the largest box office - in terms of ticket sales - in the film industry," Roberts said. "I knew that for projects it would be really important to be able to reach that audience and have firsthand knowledge of what speaks to them culturally and be able to market to them in a meaningful way."

Since graduating from USC last spring with degrees in both film production and computer science, Roberts has had a front row seat to the cutting-edge world of virtual production in a job with a startup studio. The technique has been used in Marvel movies and the recent remake of "The Lion King."

"It just gives you a lot of breadth of creativity and cuts costs," she said of the technology.

She aims to bring that knowledge to bear on her overseas assignment.

"I'm hoping to intern with some Chinese visual effects companies," she said. "The more connections you have, especially in the film industry, the better."

Asia is not unfamiliar territory for Roberts, who visited Chennai, India, in 2014 to conduct a camp for Code Your Chances, a nonprofit she founded to teach coding to young girls.

"If we encourage (girls) and get them comfortable with STEM-related fields, when they come across it later in life they're not scared," Roberts said.

She admits to being daunted by the rigorous interview process to earn Schwarzman entry.

"You go in and there are heads of state, military generals, business CEOs, really intimidating people," she said.

The Economist and New York Times became her regular reading materials to bone up on current events in preparation.

"For a while there I was very up to date. I have since sort of taken a news break," Roberts quipped.

She received a course of Mandarin lessons as a Christmas gift to help ease her upcoming transition. But she hopes to find a common language through her preferred medium.

"It's definitely an interesting time to be going to China with everything that's going on," she said. "Being able to reach them with these stories and narratives, I think, can only help create a better and more understanding world."