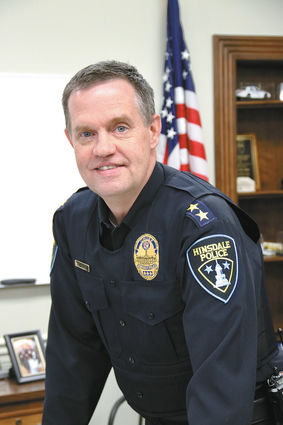 Hinsdale Police Brian King said motorists should approach legalized marijuana with the same level of responsibility as they should with alcohol. "Hopefully that same social consciousness will extend to diving impaired with marijuana," King said. (Jim Slonoff photo)

need to know about the legalization

On Jan. 1, recreational marijuana use becomes legal in Illinois. The Hinsdalean asked Hinsdale Police Chief Brian King to shed light on some of the details the marijuana legalization law.

Illinois residents age 21 and over to will be able to possess up to 30 grams of cannabis, King said. Possession of more than 30 grams can earn someone anywhere from a misdemeanor (up to a year in prison and $2,500 fine) to a felony, depending on the amount and any previous offenses.

Non-Illinois residents age 21 and over are permitted to possess up to 15 grams of cannabis. There are also two provisions for those under age 21 to legally purchase, possess, grow or consume cannabis, King noted. One is when the drug possession/use relates to medical marijuana. The other is the Community College Cannabis Vocational Pilot Program.

"They get a card if they're in those programs, and they must have that card on them," King said.

Consumption of cannabis is essentially limited to private areas.

"It cannot be consumed in parks or on the grounds of schools or in a motor vehicle at any one of those locations," he said. "It can also not be used in proximity of anyone under 21 years old or at a residence used as a child care facility."

Businesses may prohibit use of cannabis on their property, he said. Condo associations can restrict it in common areas but not in private residences. Parents may allow their own children to consume cannabis at home in their presence, but not someone else's child.

"It's very similar to (the law against) providing alcohol to minors in the house," King said.

Cannabis should be carried in traceable containers that identify the authorized distributor," he said.

"It's supposed to be secured and reasonably inaccessible while in a moving vehicle. It also should be sealed, odor-proof and child-resistant," he added.

The new law doesn't make cannabis paraphernalia legal per se, but does allow authorized dispensaries to sell it. And as long as the cannabis doesn't exceed the limit, paraphernalia is protected.

"Police cannot seize it or charge you for possession of drug paraphernalia if you don't have over 30 grams," King said.

If someone is stopped for impaired driving due to marijuana, the procedure is similar to that for a DUI.

"We field test with some slight deviation (from a DUI). Impairment tests due to drugs have been pretty standard for a long time," he remarked. "The drug component really presents no major changes for us."

For someone to be considered driving under the influence of cannabis, a blood test must be administered within two hours of the person being in control of the vehicle.

Those restricted from using cannabis under the law are law enforcement officers, corrections officers, probation officers, firefighters and drivers of school buses and commercial vehicles.

"We don't anticipate that this is going to present a disruption to our operations," King said. "It's business as usual."