Work is play for businessman, philanthropist 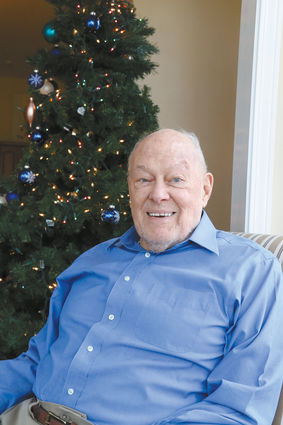 DICK BURRIDGE SR. GREW UP IN HINSDALE AND RAISED HIS FAMILY HERE • HAS NINE GRANDCHILDREN • LOVES TO TRAVEL, ESPECIALLY TO FLORENCE • FINDS READING A JOY • GETS UP EVERY DAY ANXIOUS TO GO TO WORK • Now lives in burr ridge

The former Hinsdalean, who will turn 91 in March, has a zest for life lacking in many half his age. He still enjoys going into the office several days a week at RMB Capital Management, a firm founded by his son, Dick. Jr.

"I go to work anywhere from two to four days a week - when the market needs support. When the market can carry on on its own, I can stay home," he said, his sense of humor shining through.

He points to his father as the man who set the example when it came to work ethic.

"I was motivated by my father, who got through the seventh grade in school and had to go to work to support his aunt as well as his family," Burridge said.

Both his father and great-aunt were very successful.

"I have come along on their shirttails," he said.

He has had quite a successful career as well, spending 17 years at Northern Trust Co. before starting his own firm, which he later sold.

"You have to really want to go to work every day. That's the job you have to find and I found it very early," Burridge said. "Investing is such an intriguing business - and money maker. You can work and get rich at the same time."

His financial success naturally led to his involvement in philanthropic endeavors.

"It seemed to me if I made good money, I should give some of that back. I've had that feeling and way of life for a long time."

The causes he has supported are too numerous to list, ranging from the Burridge Center for Securities and Valuation he established in 1999 at the University of Colorado (his alma mater) to serving as chairman of Blue Cross of Illinois to being a director and former chairman for Wellness House in Hinsdale.

Success in life can be boiled down to two decisions, he said, when asked what advice he's given his three sons, Dick Jr., Scott and Peter.

"There are only two things important in life - the person you marry and the job you have. The rest of it is just busy work," Burridge said.

Oh, and invest your money.

"The first thing you do is take your savings out, your investment money out, and you never have to worry about retirement."

Dick Jr. said his father has had immeasurable influence.

"His conviction regarding how to succeed as an investor has had a huge impact on me, my colleagues and our clients, making it impossible to quantify the impact he has had during his career/life," Dick Jr. said.

Next month will mark 10 years since Burridge lost his wife of 51 years, Nan. And he can't get around as easily as he once did. But the challenges of advancing age have not dampened his spirit.

"People make up their minds at age 70 that life is over," he said. "Change is inevitable. Change occurs for all of us. It's how you adjust to that change and welcome it and grow with it."