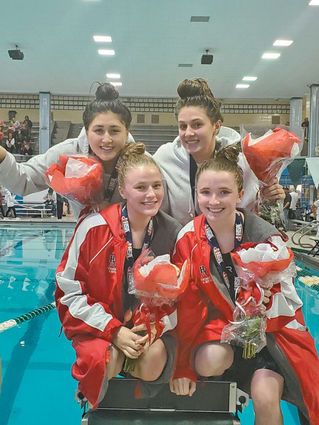 Freshman Kendall Pickering had the best individual showing, placing fourth in the 100-yard backstroke, the only freshman to finish in the top five. And her time of 55.96 was a career best.

"I really wanted to go under 56 seconds, so I was really happy about it," she said. "I knew there were going to be some older girls there that were really fast and that I had to hold my ground."

Barber said much more lies ahead for Pickering as a Central swimmer.

"Finding fourth overall as a freshman, she's starting to write her own storybook," he said.

With the relay serving as the opening event, Gruvberger said it was nice to kick off the finals with a strong performance.

"That's always definitely really exciting. It always sets the tone for the meet," said commented, adding it was her highest ever state meet placement.

After shaking off some early jitters, Pickering settled in quickly to lead the quartet.

"All the girls on the team were talking abut it, but once I got there I realized how excited and how big the crowds really are," she said. "That's like one of my favorite events. You give it all you've got and you're swimming with your best friends."

Barber was happy with the outcome.

"We're always excited about getting the first event in the top six," he said.

Junior diver Robyn Tischke's 11th place in the 1-meter diving competition was a testament to her tenacity, Barber said, explaining that her ankle surgery prior to the season meant she couldn't compete until right before the postseason.

"She came back virtually a week or two before the conference meet, and she didn't miss a beat," he said.

Gruvberger was also a member of the team's 200-yard and 400-yard freestyle relays that finished 10th and eighth, respectively.

"A huge part of swimming is relays, and being a part of a team effort is always really great," Gruvberger said.

Barber said qualifying three relay teams for the finals is the mark of a strong program, and he was happy for Gruvberger that she was an integral part of each one.

"She's a special athlete that's given her heart and soul to the program," Barber said. "She will be impossible to replace."

Pickering also competed in the 400-yard freestyle relay, swimming the final 100 with a mission to make up as much ground as possible.

"I love anchoring," she remarked. "It's just the feeling of chasing someone down and doing it to get your team a higher placement."

This year's squad broke seven school records and came within a second of breaking several others, Barber said.

"We were conference champions and sectional champions," he said.

Barber said the athletes gave their full effort in preparing for the state meet and made the most of the opportunity.

"They rose to the occasion and did a really nice job," he said, citing the first-year Central swimmers in particular who demonstrated veteran poise, even when some last-minute changes were made to event assignments.

"They showed they could handle that (state final) venue," Barber said. "It just shows our depth. These girls should know that I'm very proud of them."

Pickering said competing at state was like a dream come true.

"I've been waiting for high school season since I was in fourth grade," she said, crediting the mentorship of upperclassmen like Gruvberger with helping equip them to succeed at this level.

Gruvberger said it was bittersweet to be at her final state meet, but the Cornell University recruit is high on the Red Devils' future prospects.

"I was the only senior there this year. It was fun to be with a really young group and see them experience it for the first time, and it brought me a lot of joy knowing that these girls still have so much time ahead of them," she said. "They allowed me to be the leader that I was, and I learned as much from them as they did from me. They're like my second family."

The future does look bright for Central, Barber suggested, and he hopes his returning state swimmers embrace their potential.

"Hopefully it will keep them motivated to be able to stay in the water and be ready for next season," he said.

The following Hinsdale Central swimming & diving team members competed in the finals of the IHSA state championship meet on Saturday.