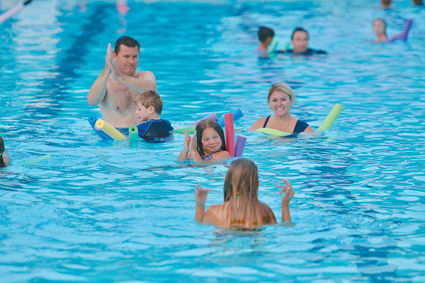 Families enjoy a movie night at the Hinsdale Community Pool this summer. Village parks and recreation officials reported that special events have been popular at the pool as they look to attract both residents and nonresidents to the facility. (file photo)

Hinsdale Community Pool visitors next season may be greeted with an earlier open swim time but reduced back-to-school hours.

Those were a couple of the potential changes discussed during the Nov. 12 meeting of the village's parks and recreation commission. Sammy Hanzel, recreation supervisor, presented the end-of-season pool report to commissioners at the meeting, highlighting that the pool's $326,843 in revenue was a nearly $15,000 increase from 2018, mostly due to higher pass sales and daily fee purchases.

"Pass sales saw its increase entirely in neighborly and nonresident passes," Hanzel said. "We did see an increase in visits this year, primarily with our members, which is always good."

On the expense side, salaries dropped about $5,000 to $153,558, even though a full-time pool manager was hired for the first time this year. Heather Bereckis, supervisor for parks and recreation, said that move served to provide better personnel management and cut costs.

"We add the extra (back-to-school) hours and everything, and we still managed to keep that staff budget down," she said.

"You guys have done a great job with expense management and maintenance scheduling and cycling through the seasons to prevent unwanted repairs in the middle of the season," Waverley said.

Bereckis identified an opportunity to save more money by closing at 7 p.m. instead of 8 p.m. after school has resumed.

"Our staffing costs are incredibly high," she said, noting one or two lap swimmers may show up that last hour. "So because we see such a decrease during that time, we think it might be valid to cut back our hours to 7."

There was a short discussion about possibly starting open swim at 11:30 a.m. or noon instead of 12:30 p.m. by moving swim lessons earlier.

"People would be really happy about an earlier opening," Commissioner Heather Hester commented.

Bereckis said the department is also exploring the feasibility of serving alcohol at the pool's adult-only nights.

"We are hoping to be able to incorporate that," she remarked.

Bereckis also apprised commissioners that the village made it through the first round of cuts with its OSLAD grant application to help offset the estimated $1.4 million in capital pool improvements starting next fall. The Illinois Department of Natural Resources, which administers the grant program, has $29 million in funding to award.

Bereckis admitted initially feeling pessimistic about the village's chances, since its plan is to reconstruct an existing pool. But she now believes the pool's patronage by people from multiple towns will help its cause.

"We have such a large base of non-residents that come here. We have a very unique pool because it's a 50-meter outdoor pool that's public," she said. "We really impact a lot of the surrounding area."