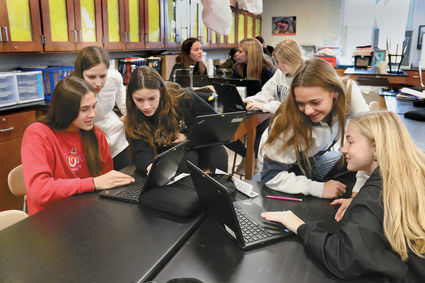 The boys and girls pored over their monthly income and expenses. Nice digs were desirable, but the rent/mortgage payments had to fit within a first-year employee's salary.

Real estate broker Mike McCurry laid out the housing options for students - including moving back in with mom and dad.

"The landlord is going to run your credit and ask, 'How much do you make?' and calculate if you can afford it," McCurry told the assembled Clarendon Hills Middle School eighth-graders. "What is real - and what can we afford?"

The students were taking part in the school's Real World Day program Friday, grappling with economic decisions they'll be making once they're on their own. The kids developed a personal budget for everything from housing to transportation to grocery shopping based on a realistic starting salary for their intended profession.

Program coordinator Meghan Carey, differentiation specialist at CHMS, said the day was the culmination of the students' financial literacy week.

"Our goal is for them to have a better grasp of what to expect and to be better prepared for that moment in time when they become fully independent," she said.

The results from researching salaries "can sting a little bit," Carey remarked, as students awaken to the actual limitations of a paycheck. Students reported figures ranging from $30,000 to $60,000. She collected post-project reflections from eighth-graders like Charles Lynch, whose eyes were opened to how quickly income goes out.

"It was shocking to me how difficult it is for new college graduates to keep their heads above water," he stated. "Between groceries, college payments, taxes and other expenses, I realized it was very hard to stay in the black."

McCurry underscored the advantages of establishing and maintaining a good credit score by staying on top of bills.

"Don't be late! As soon as you get the bill, send (the payment) in," he counseled pupils. "If you haven't paid your bills on time, you may not be able to get a landlord to believe in you."

Students were required to fashion a budget plan that was balanced. There was no cheating like, for example, renting a studio and then trying to cram three or four people in it. And living at home still carried a $300 monthly payment. Ella Graeb said as adults, they'll need to play by adult rules.

"It seems silly, but this symbolizes how there are no shortcuts when It comes to being functional in society," Graeb said.

Up in the "car dealership," students discerned how rich their rides could be (with a $10,000 allowance for a down payment). Across the hall, students figured out their how much their regular shopping list would set them back.

The room also contained the Wheel of Fortune/Misfortune that was spun to reveal a fiscal bombshell. Student Connor Burke said the wheel wasn't so kind to him.

"I had all of my savings drained when I had to pay for a friend's destination wedding. That wasn't fun but was realistic," he said.

"It really shone through the hazy fog of my misconceptions of how expensive having fun is," she remarked.

Lynch said he learned how slippery the debt slope can become.

"I realized you need to stay on a very tight budget for what you can afford and what you can't," he related.

Earlier in the week students worked on interviewing and speaking to bolster their chances of being hired. And Carey said the curriculum gives them a better sense of macroeconomic issues and offers insight into how events like the Great Depression can occur in the absence of sound fiscal regulations. 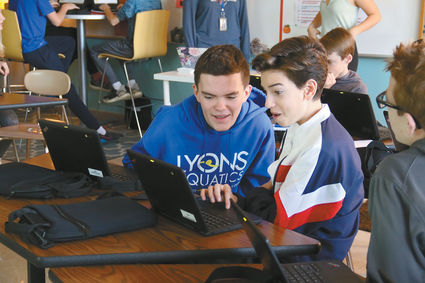 Students Connor Gannon and Willem Marginean see how their finances are holding up during Real World Day Friday at Clarendon Hills Middle school.

"They're able to apply financial literacy to the historical events in society and how individual financial decisions connects to our wider economy," she said.

"It's all about trying to save money as you get older to own something so that you have some sort of investment in a community," she said.

Student Lilly Parrillo plans on renting at first, especially if utilities are all or partially included.

"Having a little apartment is a good start," she said

Burke said he has a new appreciation for investing and saving.

"If you are already working so hard, it is good that your money is working for you, too," he said.

Graeb spoke for many in feeling more ready for the future.

"I'm very glad we took a day to learn about this, considering how many teens have no clue how it works," she said.