Caregiving a challenge and a privilege 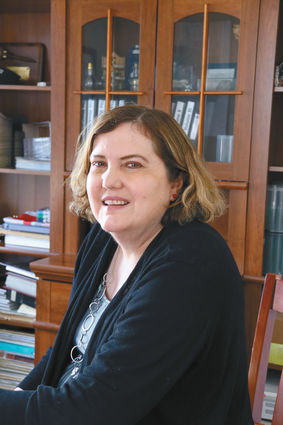 Caroline Johnson will read from her collection of poems, "The Caregiver," at the Hinsdale Public Library this month, which is National Family Caregiver Month. The unexpected responsibility was rewarding and challenging, she said.

with a quilt, put drops in his eyes, rub powder on a rash, splash his neck with Old Spice, then

bend down to kiss his cheek goodnight."

Caroline Muller Johnson has a deep appreciation for people like Donna, who took care of her parents full-time for years.

"Donna was a wonderful person," she said. "She really taught me a lot about caregiving - a different kind of love than the love you grew up with."

Donna provided most of the day-to-day care, with Johnson describing herself as the family caregiver for her mother, who had Alzheimer's, hydrocephalus and rheumatoid arthritis, and her father, who was first diagnosed with Parkinson's and later with a more rare neurological disease, multiple system atrophy.

"You don't go to school to be a caregiver," said Johnson, a Hinsdale native and Hinsdale Central graduate. "The role is thrust on you. To me, it's one of the most important jobs I've ever had."

Johnson documents her experiences in her first full-length collection of poems, "The Caregiver," which she will read from Nov. 13 at the Hinsdale Public Library (see Page 44 for details).

"These poems were written probably over a 15-year period," she said. "They just came out of me because that's what I was going through.

"You're witnessing what's going on, for good or bad, but it's also cathartic. It's a way of grieving to do it."

Johnson first began to notice her parents' decline while she was living with them at their Plainfield home during her own illness.

"They helped me through a difficult time, so I like to think when I was a caregiver for them, it was my time to give back to them," she said.

Johnson has three siblings - two sisters who live out of state and one brother who lives in the area - all of whom have children. Single at the time, Johnson said she became the natural choice to help care for her parents.

"The main responsibility fell on my shoulders. I didn't mind," she said.

In many cases, caregiving extends beyond meeting the physical and emotional needs of the person who is ill.

"I had to manage everything," Johnson said, from meeting with doctors and lobbying for hospice support to arranging for a new deck to be built and the driveway repaved.

"There's just always something to do. I didn't have a house. I didn't know all these things," she said.

Dealing with her parents' memory loss, especially her mom's Alzheimer's, required the right frame of mind.

"You kind of had to have a sense of humor because she was kind of funny with some of the things that she would say," Johnson said.

She lost her mom in 2011 and her father four years later. She was with both of them at the end.

"To some people, it could sound morbid, but I was holding my mom's hand and my sister-in-law was holding her other hand when she took her last breath," she said.

Caring for her parents was certainly challenging, but it also brought unexpected rewards. She was able to spend significant time with her parents as an adult, even after she moved to Willow Springs and got married.

"I actually looked forward to visiting my parents when I would go once or twice a week," she said. "I had this relationship later in life with them that (my siblings) didn't necessarily have."

Her experiences also inspired the poems she's compiled in "The Caregiver." She had the opportunity to speak to fellow caregivers at one of her readings, an experience she relished.

"I wish I could connect more with caregivers," she said. "I think there's a need for that. I think in the future it's going to be a big issue. As everyone ages, who is going to take care of these people?"

She also enjoyed hearing Garrison Keillor - a favorite of her father's - read two of her poems ("Dangerous Driving" and "Rewind") on his daily podcast, "The Writer's Almanac."

At the Nov. 13 event, her reading will be followed by speakers from St. Thomas Hospice and Wellness House, a Q and A session and a book signing. Johnson is looking forward to sharing her poems.

"I'm very proud of this book. I believe in the mission of this book," she said. "I think the people who read the poems, especially if you are going through it or have gone through it, they can find something in there."