Post members celebrate centennial, prepare for Veterans Day and look to the future 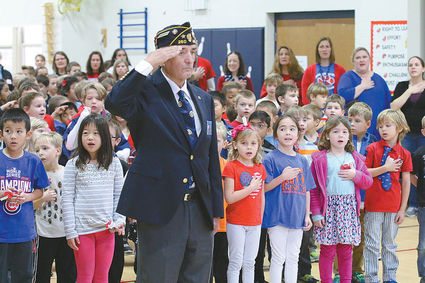 Joe Chiodo, who was commander of Hinsdale's American Legion Post 250 at the time, visited Madison School on Veterans Day in 2016.

Charlie Hartley's motivation for joining American Legion Post 250 came from an unlikely place. He was attending a funeral service in Ohio.

"The American Legion did such a great job for my son-in-law's dad," he said. "I came back and said I've got to join the legion."

Hartley, who joined the post about six years ago, has been serving as its chaplain for the past three years. One of his duties is to reach out to the families of servicemen who have died. He checks the obituary section of this newspaper weekly.

"Every time I pick up The Hinsdalean, I look for a person who was in the service," he said.

He also contacts funeral homes asking them for the DD214 - the Certificate of Release or Discharge from Active Duty. Sometimes the person taking his call doesn't know what he's referring to, which troubles him.

"When I address the envelope, I try to get the rank," he said. "It makes me feel very important that we're sending sympathy cards to the family."

And the effort is appreciated. One family even sent the post a donation.

Hartley stepped beyond his role as chaplain last month to organize a tribute for the post's centennial. He worked with the village to display 100 small American flags on the lawn of the Memorial Building for three weeks in September and early October.

"The people in Hinsdale right now know more about the post than they ever have," he said.

Hartley appreciates the effort the village made to help mark the grid for the flags and for the police officer who checked the field daily. Not one flag was disturbed, Hartley said, his gratitude showing in the tears that filled his eyes.

Assistant Village Manager Brad Bloom said the display was fitting for its location.

"The building is called the Memorial Building so that the sacrifices made by the young men and women from Hinsdale would not be forgotten," he said, adding that the village received many positive comments about the display.

The building actually owes its existence to Post 250, which raised money for its construction. In recognition of that, the post has its own space there, the Soldiers and Sailors room.

"A little known fact was when they went door to door to collect donations to build the Memorial Building, donations were made with the understanding that space would be set aside for the American Legion," Bloom added.

Hartley dropped off another 100 flags last week at Hinsdale Middle School, where the display will be recreated in honor of Veterans Day next month. Several post members will be out presenting colors and talking to students about their experiences.

Mindy McMahon, who served as Madison School principal for 23 years before retiring in 2015, said the veterans' annual visit to the school was meaningful.

"It was a powerful assembly each and every year," she said.

McMahon said she remembers sitting at the school board meeting when Community Consolidated Elementary District 181 made the decision to have students attend school on Veterans Day. Educators made a commitment to observe it each and every year.

"I think it brings history alive," she said of listening to the veterans share their stories. "I would much rather have a live person there telling your their stories than reading out of a book. Children have an opportunity to ask questions."

The assembly also stirs feelings of pride in students who have a veteran as a family member or friend. They always enjoyed seeing the late George Hogrewe, who was a senior reader at the school, at the assembly, she said.

Unfortunately, the number of post members available to participate in the school assemblies is dwindling. Twenty-year member Joe Craig, past commander and current judge advocate and service officer, said he's witnessed a steady decline in membership.

"We're maybe half of what we were when I first associated myself with the Hinsdale Legion," Craig said.

The American Legion is an important organization for the work it has done to help veterans since its founding in 1919, Craig said, citing to its involvement in creating the GI Bill and Veterans Administration programs.

"We need to keep that influence," he said.

Locally, the Hinsdale post offers many wonderful programs, he added, such as Boys and Girls State, essay contests, Memorial Day ceremonies and more.

"Our basic problem is really perception," Craig said. "People think Legion posts are guys who sit around and smoke cigars and drink. We need to change our perception."

"We're hoping to have an influx of news members based on that," Craig said.

The change also means more wives, daughters and granddaughters of veterans are eligible to join the auxiliary, he noted.

Craig believes some changes to the way the post operates might make it more attractive to younger veterans.

"Life is so busy," he said. "They want activities that involve their families. We have to evolve, too.

"We need the younger guys to come in and tell us what they want and what they need us to do," he added. "We need all the veterans who are out there to come help us succeed."