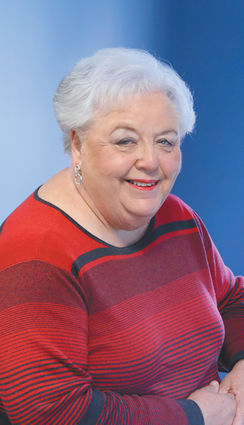 Art historian Phyllis Kozlowski, who helped start the former Hinsdale Center for the Arts, will give a pair of Armchair Art History talks this month at The Community House. The Elmhurst College professor has visited 37 countries to study famous works, including China.

Phyllis Kozlowski had been enlightening art history students about the Byzantine-era marvel Hagia Sophia in Turkey for years before finally seeing the former cathedral with her own eyes as part of a tour she led.

"It was absolutely gorgeous," she said.

"I try to talk about not only about the medium, but also some of the legends that go along with the works," she related.

Laying a groundwork of cultural understanding helps focus the lens through which to engage with the art.

"I'll start out with some of the basics of what you need to know about the country and the culture. It helps to set the stage by learning a little about the people and their heritage," Kozlowski said.

For her Art of Asia talk, that means giving a quick overview of the Buddhist and Hindu religions that have been so influential in the region. She'll explore semi-spherical stupas and multi-tiered pagoda temple towers along with traditions such as woodblock printing techniques used to make Chinese scrolls and Japanese ukiyo-e.

"I'll bring in some examples of Chinese scrolls," Kozlowski said, noting that sculptures will also be discussed. "If you look at a Buddhist sculptural piece, the position of the figure's hands are very meaningful."

In her second lecture on Native America, Kozlowski will give a survey presentation looking at the types of art that the tribes of each region created.

"We'll start in Alaska and the northwest and go into the southwest, the area around the Four Corners," she said. "We'll move into the Plains and the Woodlands tribes of New York and Northeast."

From totem poles in the Pacific region to decorated tepees in the Plains, Kozlowski said the variety of expression was a reflection of their natural worlds.

"I think each culture adapted to their own environments, whether it's the desert or the Plains," she said.

Kozlowski lamented that many institutions of higher learning have trimmed - or eliminated altogether - art appreciation courses.

"We live in a very global society, and I think it's a really positive thing for people to have a little background in the cultural heritage of a people through their art," she commented. "Art can communicate to people. There are no language barriers there, and I think that's a very important point."

Kozlowski also hopes to motivate students to take advantage of Chicago's world class repositories like the Art Institute and Field Museum, where so many celebrated specimens are housed

"I never miss going to a museum when I travel," she said.

Those less familiar with the world of art may derive more out of her talks, Kozlowski surmised, but all will benefit.

"It's for anybody to come in and enjoy the classes," she said.