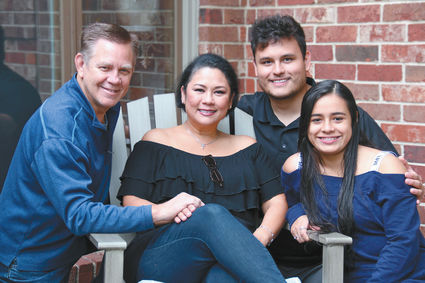 Angie, who was adopted by Mike and Yoshiko Imai Burchinal this summer, is enjoying being a student at Hinsdale Central and spending time with her new family, including older brother Juan.

"There's nowhere you can be that isn't where you're meant to be."

"All You Need Is Love"

Yoshiko Imai Burchinal didn't go to the Kidsave picnic in Oak Brook last summer looking to adopt a child. She merely wanted to support an organization featured in a Hinsdalean article given to her by a friend.

Nor did she invite the 14-year-old Colombian girl she met there to her home because she wanted to grow her family. The mother of four and grandmother of four thought it would be nice to treat Angie to homemade arepa, a Colombian dish she said she missed eating while visiting the states.

"I prepared all the Colombian food you can imagine," said Yoshiko, who was born and raised in the South American country. "She loved it and it was very interesting, because I think she knew that she was there not because we were interested in adopting her. She was very comfortable."

At least that's what Yoshiko thought. Later she and her husband, Mike, learned Angie was feeling something quite different when she was visiting their Third Street home. Just before the adoption was finalized, Angie made a confession.

"Do you know, Mom, the very first day I came to your house, after I had breakfast, I went to the bathroom and prayed," Yoshiko remembers Angie telling her. She prayed to be part of a family like the Burchinals.

"You can't imagine how many tears my husband and I were having that day," Yoshiko said.

Yoshiko believes the adoption came to be because of Angie's prayer. Looking back, the whole thing seems preordained.

First there was the article in The Hinsdalean, which featured Tripti and Dave Burt, who were Kidsave hosts last summer for a boy named Johan Stewar. Burt lived just up the street from the Burchinals, but the families had never met before the picnic last summer.

"It's neat that your paper's article really triggered these two worlds coming together," Burt told The Hinsdalean.

Burt knew of Kidsave through her brother-in-law's family. The mom of four, she was not looking to adopt, either. But she was more than willing to host a child - and to share what she knew about the organization with Yoshiko, who also goes by Claudia.

"Claudia lived up the street from me and I didn't know her at all," Burt said. "She's like, 'Because of you, Tripti, we got to know Angie.' I just feel very lucky because we only hosted Johan, but I feel like we were intimately involved with placement for both of those children, and they are both beautiful kids."

Burt said she thinks the program is successful because it gives families the chance to get to know children they might want to adopt. That opportunity made all the difference for Angie and the Burchinals. Their first day involved much more than eating arepas. They went swimming at Five Seasons, played bocce and attended Mass at St. Isaac Jogues.

That night, Mike asked Yoshiko if she would consider adopting.

"My immediate answer was, 'No,' " Yoshiko said.

But after two more visits, her heart had changed.

"I started to get to know her and we talked, and after day three I completely fell in love with her," Yoshiko said. "It was just like, 'Wow!' We connected so well. It was so natural, so organic. She is a very sweet girl."

The ability for Yoshiko and Angie to talk in Spanish and share stories of their homeland were significant, Mike said. As Angie spent more and more time with Yoshiko, the connection just grew stronger.

Once Yoshiko and Mike knew they wanted Angie to be part of their family, they talked with their kids. Juan Imai, 21, the only one still living at home, would be affected the most.

"I thought it was great," Juan said. "It was exciting. It's a change, but a good change."

Nicole Burchinal, the oldest, had met Angie during one of her visits but had no idea what was in the works.

"You probably can't say in a newspaper what I said," she remarked, recalling her reaction to hearing the news.

But just as she had welcomed her stepmom years ago, she was ready to welcome a new sister - and aunt to her 6-year-old daughter, Kayleigh.

When Angie returned home to Colombia, she had no idea what the future might hold. It wasn't until she received a letter of intent in September that she learned the Burchinals wanted to adopt her.

The waiting was difficult on everyone. Hourlong Skyping sessions twice a month helped, as did Yoshiko's trip to Colombia in February. Typically, prospective parents aren't allowed to visit, but Yoshiko found a way.

"I fought with everybody," she said. "You don't even want to know."

The two spent the day with Yoshiko's family members, many of whom still live in Colombia.

"We had an amazing day at my brother's house," she said. "I think it was very good for us. It recharged our hearts because it's too hard. It's too long."

Five months later, the waiting was over. Angie officially became a part of the family July 3.

"It was wonderful," Yoshiko said of the reunion. "It was so beautiful when she comes into this room where we are waiting for her. We all cried. It was very emotional."

"My favorite part is being with my family and spending time with them," Angie responded in English when asked what she enjoys most about living in the United States.

She also likes her English classes and being part of Peer Buddies at Hinsdale Central, playing marathon Monopoly games and trying American food.

"She still has to try Portillo's," Juan noted. 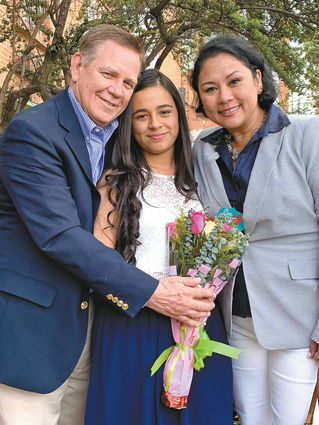 Yoshiko and Mike Burchinal arrived in Colombia June 30 to finalize Angie's adoption. The found the same girl they fell in love with the summer before. "Since Day One she has always been the same person, very sweet, very thoughtful, very caring," Yoshiko said.

She's also enjoyed keeping in touch with some of her Kidsave friends, including Johan, who stayed with the Burts last summer. He was adopted by a family who lives in Miami and is planning to visit Angie in February.

The Burchinals, who moved to Oak Brook in June, have filled a hole in Angie's heart. And she, in way, has helped make their family complete, too.

"We had thought of having a child some years back, and it never really happened, though we tried," Mike said. "I think in the back of our minds we always thought we wanted to have another child. This was just so perfect because of the Colombian connection."

But that connection wasn't necessary for strong bonds to form.

"I fell in love with her pretty quickly, I guess," Mike said.

And now a family that first came together 19 years ago with Mike and Yoshiko's marriage includes one more member. Angie doesn't have a history with the family, but that doesn't matter.

"To me there is no difference," Yoshiko said. "She is our daughter."