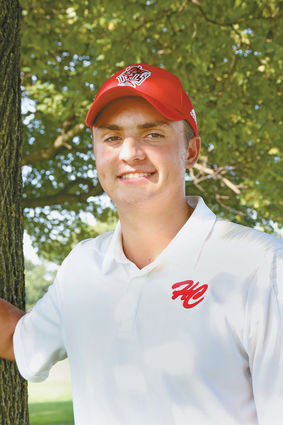 What's it like playing for such a successful golf program?

It's special. It's nice to be in a winning culture. There's a little pressure, but that also helps. We just have to know how to channel it.

What's your goal this season?

My goal is to win state title individually. For the team, I want to keep the state championship streak alive. I also want to win three invites personally.

Pebble Beach and Shore Acres. Both are really special places. I'd love to play Cypress Point in Monterrey.

When did you first pick up a club?

I've been golfing since I was 4. My grandfather played and my dad and older brother played, so I would just kind of joined them on the course. Some families go to movies. We would just go the course and play together.

What's your strength as a player?

My early career I was always really talented around the green. Over the last couple of years, I've gained some height and along with that has come more strength and longer drives off the tees. It all just came together this year.

How have you developed as a golfer since freshman year?

I'd like to go to school on the East Coast, so I'd love to find myself living and working out there. I'd love to have good finishes in the Mid-Amateur and the U.S. Amateur and be able to play Augusta National.

Why does coach Jess Krueger like having Bartuch on the squad?

Jack brings senior leadership and three years of varsity experience to the Hinsdale Central boys golf team. He leads by setting a good example both on and off the course. He carries himself as a gentleman who does the right thing. Honesty, integrity, sportsmanship and respect.