Summer was sweet for Caroline

Hinsdale native demonstrates her tennis talent at the Pan Am Games, U.S. Open 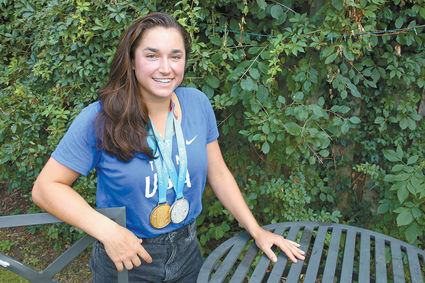 Hinsdale's Caroline Dolehide shows off the gold and silver medals she won in doubles and singles, respectively, representing Team USA at the Pan Am Games this summer. "That team atmosphere is what I love. We were all there for one reason, and that was to win medals for the U.S," she said. (Jim Slonoff photo)

What constitutes an memorable summer? If you're a professional tennis player like Hinsdale's Caroline Dolehide, the season couldn't have served up a much better sequence of thrills and delights than 2019's just did.

To kick it off, the USTA chose Dolehide to represent Team USA at the Pan Am Games in Lima, Peru. It was a smart choice. On Aug. 3, she and partner Usue Arconada became the first American gold medalists in women's doubles since 1991 at the quadrennial sporting event. The duo didn't drop a set en route to the championship, despite a slippery red clay surface and a crowd that was not exactly hospitable to the athletes

"We had a lot of confidence," Dolehide said during a visit to Hinsdale right after the games, adding that she and Arconada had won two tournaments in the U.S. and placed second in two others in the months before Lima. "We're really good friends, that's what made it work well. We came here to win the gold medal, and we actually did it."

She said her eyes welled up on the medal stand as the U.S. flag was hoisted to the strains of "The Star-Spangled Banner." But hold the celebration. Dolehide had to rest for her singles final the next day.

The tough, back-and-forth match ultimately went her Argentinian opponent's way in a third-set tiebreaker. That just meant Dolehide received a silver to complement her gold.

"Words can't describe how nervous I was going into every one of those matches," admitted a smiling Dolehide of her singles draw. "Being out there alone and playing for your country, it was very, very nerve-wracking. The atmosphere was just so intense."

As a Pan Am Games singles finalist, she also moves up the priority list for selection to the country's 2020 Tokyo Olympics contingent.

"There's still a little bit of hope, and I still have a little bit of time to get my ranking up," she said. Dolehide's current world rankings are 201 in singles and a career-high 69 in doubles.

There's nothing like winning tournaments to boost one's ranking, and that's what unfolded the week of Aug. 12 as she carried her newfound medalist's confidence into the Thoreau Tennis Open in Concord, Mass. Dolehide needed the benefit of a wild card to get into the tournament, where she proceeded to vanquish a series of higher ranked adversaries and capture the title. A video posted on the tournament's Facebook page shows Dolehide joined by all of the ball kids in a victory plunge in the tennis club's pool.

Next up was the U.S. Open. Dolehide had played in both the qualifying and main draw of New York's Grand Slam event before. But this was different, she said.

"This was the first time that I felt like I truly belonged there and could go really far, in the sense that I just felt calmer in general," Dolehide explained. "Emotionally, and everything else that comes with playing on the biggest stage in the world, plays a huge part in performing. I truly believe that playing in the past, under the lights, in extreme New York summer heat, when Kelly Clarkson performed on center court, etc., gave me the experience I needed to come back and show what I've learned."

Dolehide made it through the three qualifying rounds. Her reward was a first-round match with China's Qiang Wang, a top-20 player in the world. It was a tight 6-4, 6-4 contest won by Wang (who, incidentally, just kept winning until Serena Williams upended her in the quarterfinals). It was a validating experience, Dolehide said via email from Orlando where she lives and trains. 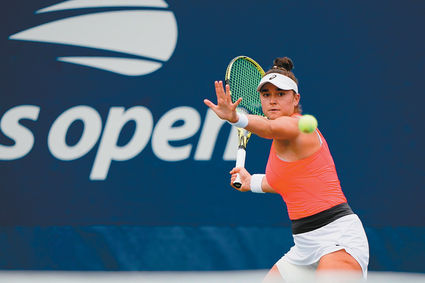 Dolehide staged another remarkable run at the U.S. Open, qualifying for the main draw in singles and making to the semifinals in women's doubles earlier this month. "Playing doubles is so fun for me because you have another girl on the court that you can bond with and talk to and learn with." (photo provided)

"I will remember the confidence that came from the work I did before the U.S. Open and seeing it show by winning three singles matches and then learning from my loss against Wang," she wrote.

In the doubles bracket, Dolehide was paired up with veteran and former U.S. Open women's doubles champion Vania King. The unseeded tandem soon showed they were a natural fit. After a tense three-set opening round victory, they won three straight matches to set up a semifinal against the world's fourth ranked team.

"Officially becoming apart of the 'Final 8 Club' at the U.S. Open was exciting," she said, made even more special by "having most of my family come out to support."

Dolehide, who turned 21 this month, said her maturity as a professional continues to develop.

"My experiences around the world with different cultures and people have taught me how much we all have in common, especially in sport," she said. "The common goal of work ethic is something I look for in people that I surround myself with, and it's really fun to see others try to reach their goals.

"My goal is to maximize my potential, and I am getting closer to that goal every day."

Caroline Dolehide’s breakout 2018 season propelled her to a career high world singles ranking of 102. After a slow start in 2019, she’s found her stroke in both singles and doubles with impressive performances at high-level venues.

• runner-up at Pan Am Games

• semi-finalist at Tennis Championships of Honolulu

• gold medalist (with Usue Arconada) at Pan Am Games

• runner-up (with Arconada) at Tennis Championships of Honolulu