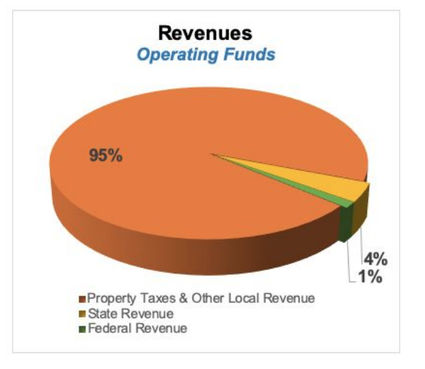 Operating fund revenues and expenses are relatively stable in District 181. As is always the case, most of the revenue is generated by local property taxes and salaries and benefits make up the bulk of expenses. (charts provided)

Community Consolidated Elementary District 181 plans to spend just a little more than $1 million more on operating expenses in fiscal year 2019-20 than it did last year.

Property taxes make up about 90 percent of the district's revenues, coming in at $62.9 million.

"The lifeline for our school district is the local property tax," Mohsin Dada, chief financial officer, told board members. "We are very fortunate to have a solid tax base."

The bulk of expenses for the district - some 83 percent - are for personnel. Salaries are earmarked at $44.9 million, an increase of 2.3 percent. That additional $1 million includes $150,000 for lane change salary increases (pay raises for teachers who complete additional education) and one additional teacher, if needed, at $75,000.

Employee benefits are budgeted at slightly less than they were last year - $9.06 million compared to $8.99 million - following a drop in claims last year and aggressive negotiations with insurance companies, Dada told The Hinsdalean.

"We feel we have been very, very fortunate in our employee benefits, and that has really given us significant stability, but this may not go on forever," he said.

The budget for purchased services also decreased by 4.3 percent to almost $5.8 million. The reduction is the result of continued savings in cost of transportation, liability/workers comp insurance, software licenses and technology services, according to the presentation.

The budget also includes $200,000 of initial funding for districtwide STEAM supplies and equipment.

A $780,000 transfer to debt service is also included as part of a five-year plan to abate property taxes that were levied but not required. By abating taxes rather than setting a lower levy, the board preserves the ability to collect the full amount allowed by law in subsequent levies.

A $2 million transfer to capital projects is designed to build reserves for any unforeseen repairs to facilities beyond those scheduled annually.

The total budget for all funds - which includes debt service and capital projects - is $79.8 million, up 2.4 percent from last year.

Dada included several charts in his presentation comparing spending in District 181 to other comparable districts. The 2018 operating expense per pupil of $16,246 falls about midway on the list of 23 comparable districts and comes in well below the $27,441 spent by Kenilworth Elementary District 48.

The district's teachers are among the highest paid in the group, and the district devotes the highest percentage of operating expenses - almost 64 percent - to instructional services.

"Every board wants to make sure that most resources go in the classroom," Dada said. "We are the highest in the comparison. We are spending 64 cents of every dollar in the classroom."

He also noted the district is on the low end when it comes to fund balances, or cash on hand at the end of the fiscal year. Board policy calls for fund balances totaling 35 to 50 percent of total expenses.

"We are more than the minimum but less than the maximum," he said. 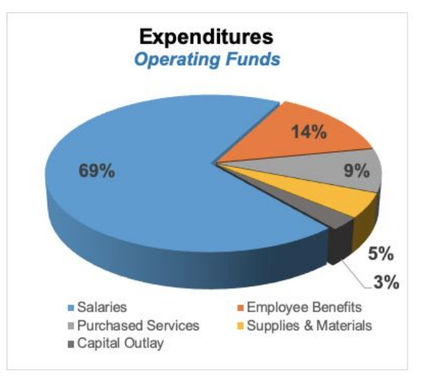 "Those are all claims against our fund balance, so we are really not as fund balance-rich as we think," he said.

The proposed budget has been on public display since Aug. 15. No one spoke at the public hearing the board is required to hold before adopting the budget. District officials have until Oct. 16 to file the budget with the county clerks of DuPage and Cook counties and the state.

Board members complimented Dada on the work he and his team have done of the budget and district finances as a whole.

"You've worked really hard over the last several years to ensure we can save where we can save so we can provide educational opportunities to our students," Meeta Patel said.