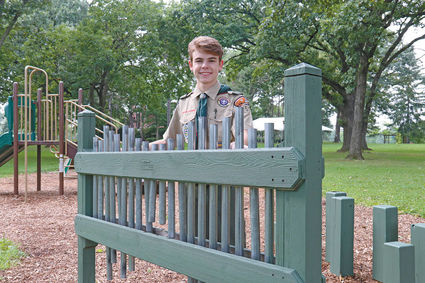 Hinsdale Boy Scout Cole Harris and fellow Troop 52 members worked to revamp the nature-based playground at KLM this summer. And at Brook Park, pickleball devotees and novices now have a place to raise their paddles.

In a clearing stands a pup tent. Closer inspection reveals it's not really a tent, but a two-sided climber, part of a refurbished nature-based playground at the park thanks to Cole Harris and fellow Troop 52 Boy Scout volunteers.

Harris, a Hinsdale Central senior, approached the village for volunteer project ideas in pursuit of his Eagle Scout rank. The deteriorated site was a prime candidate. Work began in early August with the demo of several rotting wooden benches reinforced with rebar.

"We used axes and shovels to break the wood apart," Harris recounted. "Then we used an angle grinder and a saw blade to cut the rebar off."

The village already had new equipment, but pieces like the pup tent climber and a set of tree stump steppers required assembly. Holes were dug for installation, with guidance from John Finnell, the village's forestry and parks superintendent, and concrete was poured for reinforcement.

The log tunnel feature needed no assembly - just a Bobcat skid steer to maneuver its 1,300 pounds. Tamelings Landscape Supply in Willowbrook met Harris' request for a donation of five yards of playground mulch.

"We laid down all the mulch, raked it and spread it everywhere," he said.

An existing set of wood steppers and wind chimes got fresh coats of paint to complete the makeover. Harris said the process was quite an education, from writing up his proposal and designing a project plan to enlisting volunteers and managing the work site.

"I had a lot of great helpers who helped me adapt to everything we were faced with that we didn't prepare for," he said, like stubborn concrete that resisted grinding.

Heather Bereckis, superintendent for parks and recreation, said the village receives requests annually from Eagle Scout aspirants, a benefit to both staff and citizens.

"We love working with the kids and we love projects that help improve the parks," she said. "Once (Harris) knew what we needed to do out there, he did all the planning and got the mulch donation and the volunteers. It saved us money and it also saved us quite a few staff hours, too."

Harris said he's already witnessed demand for the playground - even before the renovation was finished.

"We had to put up barriers and caution tape," he said with a smile. "But since then I've seen kids playing on it. It was really cool to see all the hard work that we put in come to fruition."

The courts are open for play, and Bereckis said programming is being developed.

"We plan to be offering some classes, like learn-to-play, some drills and some family-rated classes in the evening," she said.

Recommended hours of play for different skill levels will be posted so people can match up with the right group.

The Brook Park project, which also included resurfacing the remaining tennis courts and the basketball court, cost about $80,000. Bereckis said the vision is to eventually install a seating area for players to gather on east side of the courts as well as storage for equipment.

"It's a very social sport and a fun sport that can accommodate all ages," she said. "We're hoping to make them the premier courts for pickleball in the Chicago area." 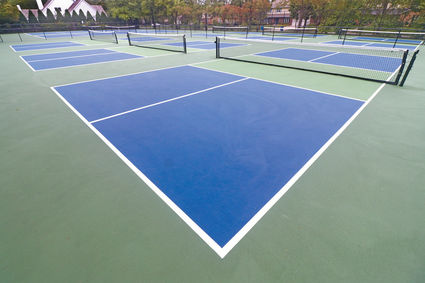 A ribbon-cutting for the courts scheduled for Sept. 3 was postponed due to weather and will take place at 6 p.m. Tuesday, Sept. 10.