Fun is a key element during rehearsal.

Hinsdale Central senior Tess Klygis isn't one to "just wing it." Whether it's a test, an audition or a performance, she likes to be prepared.

And that's exactly why she decided to be part of the Hinsdale Central Drama Club's first production of the year - an improv show guided by the experts from CSzTheater Chicago.

The experience has pushed Klygis out of her comfort zone while teaching her what she believes to be valuable tools not only for an actress, but for anyone. She said rehearsals for the September show have taught her to adapt to quickly changing situations and to make the most of an unexpected and perhaps imperfect situation.

Director Chris Kostro agrees there is much to be learned from the experience of being in an improv troupe. Like most of his 16-member cast, he had little improv experience before deciding on this show. He has taken a few improv classes at places like IO and Second City, but this is the first time he's directed an entirely unscripted and unpredictable program.

The cast of the ComedySportz Improv Comedy Competition will be separated into four teams of four. The teams will entertain the audience with improv games designed and perfected by CSz Theater. Each performance doubles as a competition, the winner of which is decided by audience applause. Audience members also will be called upon to offer prompts for many of the improv games, making them an integral part of the performance, said Keith Whipple, educational outreach director for ComedySportz Chicago.

In choosing from the 35 to 40 hopefuls who auditioned for the improv show, Kostro said he tried to mix things up a big.

"You don't want everyone to have one strength," he said. While some students were chosen for their excellent listening skills, others were selected for their quick wit or creativity.

Rehearsals for the September show have involved learning and playing the improv games that will be played on stage.

"It's really not anything like being in a typical show," said junior A.J. Andersen. But as a newcomer to the Hinsdale Central stage, Andersen doesn't have much to compare it with. He decided to audition for the improv show in hopes of building relationships and gaining experience and confidence to try out for the spring show.

Junior Charlotte Froiland said she can already see how improv is helping her to be a better actress.

"I learned so much just from the audition," she said.

Whipple said improv teaches students to take risks, to commit to an idea and to support one another, no matter how bad that idea might seem.

Improv, he said, is built on the statement, "Yes, and." Actors are taught to embrace whatever is said or done on stage and build on it.

"They are each other's script," he said of the actors on stage.

Improv actors learn teamwork, effective communication, active listening and the art of being in the moment, Whipple said. And through it all, they have a lot of fun.

Whipple will serve as referee during the show's three performances. Wearing a striped referee's shirt, he will make sure the rules are followed, including the rule of good taste. Any actor who is deemed to have acted in poor taste will be given a brown bag to be worn over his or her head.

Decorum, pacing and nuance are all skills that Kostro hopes his students will learn as part of the improv experience and take into future performances at Central and beyond.

Unlike most stage shows, this one requires little costuming or staging. The four-person student crew has just one person assigned to each team. Meanwhile, Kostro said Central's technical director, Charlie Cooper, is busy making plans for the stage.

Because each show will be completely new and completely different, Kostro suggested audience members might want to attend more than once. 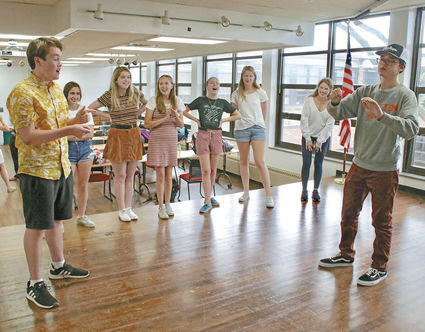 Finn Van Horn and Quintin Craig (above right) engage in an exercise.