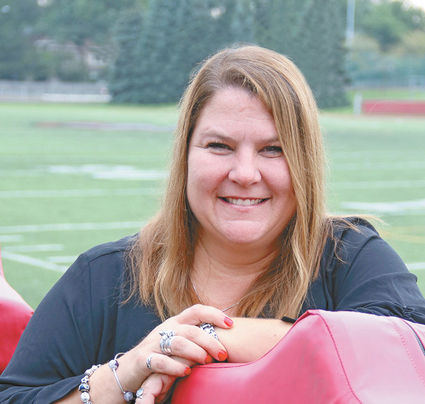 Corey Huth Moved to Hinsdale in 2006 • Rarely uses her real name, Courtney • Volunteers with the Alzheimer's Association • Worked on the YES committee for the April 2019 referendum

Football has never been just a game for Corey Huth. It's an experience that brings a whole community together.

Now, as youngest child Charlie begins his senior year, Huth is entering her final year as a football mom.

"It's bittersweet to see them become seniors," Huth said of her son and his teammates, many of whom she has known since grade school, when they played in the Falcons football program.

Huth is currently co-president of the Football Club, a volunteer organization that raises money to support the football program while also planning team dinners, supporting the coaches and putting together the annual football program. As a member of the Boosters Club board, Huth helps with fundraisers that support all of the school's arts, athletics and activities. Specifically, she is in charge of communications and grants for the Boosters.

Huth and the rest of the football club, including co-presidents Courtney and Derrick Willman, got to work on this year's season back in April, days after the referendum ensuring there would be a 2019 season was passed. She said the fact that the program was at risk has made this season extra special for everyone involved.

"They really feel it's a privilege to be on the field this year," she said.

A freelance photographer, Huth puts her skills to work for the team. She takes photos at practices, at games and for the annual football program. She also takes senior portraits and enjoys event photography and capturing photos of products for clients.

A major fundraiser for the Football Club is the silent auction, held each year at the parent kickoff meeting. Set for Aug. 24, this year's auction will include tickets to area athletic events and a football jersey signed by Hinsdale Central grad and current L.A. Ram Brian Allen. Another major undertaking for the club is the fifth annual Alumni and Friends Golf Outing, set for Homecoming Week.

Football has been part of Huth's life since she was a child and her dad would quiz her on the major college teams' colors, mascots and fight songs. She grew up cheering for the Ohio State Buckeyes and the Irish of Notre Dame.

"Our name was Fitzpatrick," she said.

Huth said her favorite part of football season is the energy and community just before kickoff, when the pommers, the cheerleaders, the band and the players are all on the field and the stands are filled with anxious fans.

She'll experience that pre-game excitement again on Aug. 30, when the Red Devils open their season at home against Naperville Central.

"It's a big game," Huth said. "I'm trying to enjoy every moment of it while it's here."

And after that, she will continue to cheer for the home team.