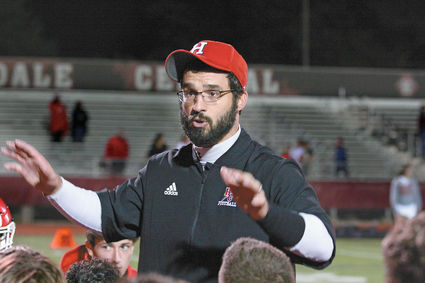 After playing for the Red Devils and serving as an assistant coach for 11 years, Brian Griffin has stepped into the role of head coach at Hinsdale Central. He plans to continue to give his post-game address to the team, as he did after last year's win against Oak Park at Dickinson Field. (file photo)

He played there as a member of a 2002 Red Devil football team that was undefeated until the state semifinals.

He's paced the sidelines during games in a variety of roles, including varsity linebackers coach, special teams coach and, most recently, defensive coordinator.

He's stood in the center of the huddle midfield, congratulating players after a win and consoling them after a loss.

Now Griffin, 34, is preparing for his first season as varsity head football coach.

"It was something I always kind of thought I would end up doing, but it was never the ultimate goal," he said. "The ultimate goal was always to impact kids.

"It is exciting to have a little greater influence and to be able to impact more kids in a substantial way," he added.

Hinsdale Central athletic director Dan Jones said he was happy to bring on a coach who has a history with the program and will bring longevity to the position.

"He is a graduate of HCHS and came back home after college to work and coach here," Jones said. "He brings that pride and tradition to everything he does as head coach."

Griffin's promotion marked the end of a turbulent spring for the football program, which was among several Central sports cut pending the results of the $139 million facilities referendum on April 2. The measure passed, but five-year head coach Dan Hartman had already announced he was leaving to lead rival Lyons Township High School's program.

Griffin, a Wheaton College graduate, was elevated to Central head coach April 24, and he said enthusiasm has been rising, too.

"There has just been a great energy from the coaches we have to the players to the parents. Everyone is really excited and positive. That's been fun," he said.

That energy helped propel him through an accelerated ramp-up to the start of practices June 17.

"I had less than two months to do a whole offseason of work," he said. "It's kind of been a blur because it's happened so quickly."

This year also has been an eventful one for Griffin personally. He and his wife, Kelly, welcomed baby Brennan in January. They also are parents to Logan, 4, and Halle, 2,

"Life is busy. The coaches have been awesome. People have picked up the slack and helped me out as I have transitioned," he said.

Griffin said he's drawing on lessons he learned from other coaches he's worked with, including three head coaches at Central.

"I think you just learn a little bit from everyone," he said. "You've got to find out what is yours and then get everybody on board with you."

He hopes to do so with this year's theme, "All In."

"My big program vision is that everyone can have a place if you're willing to work hard and commit to something bigger than yourself," he said.

"Kids thrive when they feel like they belong, and you can only feel like you belong if you feel like you have an impact on your environment," Griffin added. "What I love about football is there are a hundred different roles for people to fill."

At Wheaton, Griffin said that, while he never played in meaningful games, the experience helped shape his vision.

"Those years in college were formative for me as a person and it had very little to do with football," he said. "If you're only worrying about the 22 guys who are playing, I think you really miss an opportunity to help kids be better people and better citizens."

His concern about students as more than football players does not go unnoticed by those he coaches, according to Grant Pitcher, who had Griffin as linebacker and special teams coach when he played linebacker in 2014.

"Coach Griff cared far more about making us better men than football players, which is saying a lot considering his dedication to our on-field performance," Pitcher said, adding that he couldn't think of anyone better suited to lead the team.

Griffin is confident his coaching staff shares his vision. The group includes some new faces and some familiar faces in new roles. The entire program, freshman to varsity, lost six coaches when Hartman left, including three on the varsity level.

"I've got some great guys who are really great with kids," he said. "They see the bigger picture beyond football and want to help positively impact kids and grow them in their character and their integrity."

Knowing the players and the program has made the transition much easier, Griffin said, but his new title has not come without a few surprises. 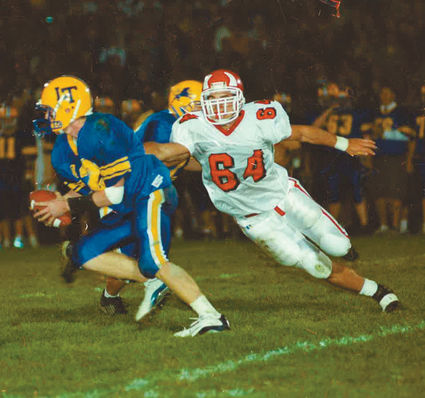 As a defensive end his senior year at Central, Griffin harassed opposing quarterbacks, as in this game against Lyons Township, and helped the Red Devils carry an undefeated record into the state semifinals. (photo provided)

"(It's) the number of small decisions that you didn't know that your input mattered on or things I just never even thought about," he said, such as the logo design on the team's practice T-shirts. "When you're an assistant coach, you show up and you coach."

One responsibility he will retain from his days as an assistant is delivering the post-game speech to the team.

"You try to play to your strengths, and I think one of my strengths is being positive and encouraging kids and trying to find out what motivates them," he said.

He continues to appreciate the community support the program receives.

"One of the strong suits of Hinsdale Central football that has always been there and continues to be there is we have such positive involvement, from the parents to the players to the community," he said. "That's something that is just incredible to be a part of.

"It just makes it fun. I'm excited to still be a part of that - just in a different role."