Triple digits are only five short years away for Ly Hotchkin 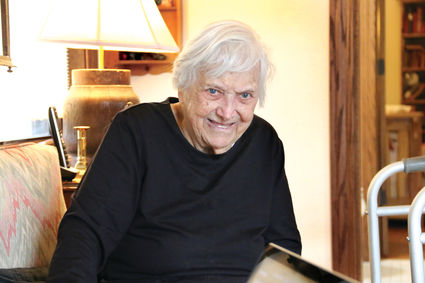 She misses having a drivers license and better eyesight, but she still enjoys laughing with people she loves over a good drink.

That wasn't the case 18 months ago. At the time, she was ready to die - and she told her doctors as much.

"I begged them to let me die because I was so lethargic I didn't want to do anything, and it was horrible," Hotchkin said. "Guess what they did? They put this pacemaker in."

The device changed everything.

"The operated one day. The next day you thought I was a different person. It was invigorating," she said.

Hotchkin's cardiologist had tried to convince her to get a pacemaker earlier, but she refused. Now she sees that was a mistake.

"My advice to old people is to listen to your doctor," she said.

About six months before the surgery, Hotchkin moved in with her son, Randy, and daughter-in-law, Chris. She had spent the previous 25 years at one of the cottages in the Woods at King-Bruwaert in Burr Ridge.

"I'm going blind. I can no longer read. I take two shots a day (for diabetes) and I take two things of pills a day," she said. "It was getting ahead of me, and I had to either get someone to come and live with me in the Woods or I had to make a change."

Hotchkin, who spent 37 years as executive director of The Community House, knew she wanted more independence than living in the "Big House" at KB would allow.

"I cannot have that kind of control on my life and I don't want to eat what they want me to eat," she said. "Chris is wonderful. She is best bartender you'll ever find."

The two enjoy cocktails, hors d'oeuvres and conversation before dinner each night.

Interaction like that is important, Hotchkin said, especially with people who have celebrated fewer birthdays than she has.

And she hasn't. Two years ago at age 92 she was the oldest cast member in The Community Revue, the biennial show that benefits The Community House. She claims, as she has in the past, that she will not return to the stage. But she'll be in the audience at the next show and available to celebrate afterward.

"I think I'll go to the parties whether they invite me or not," she said.

Her 100th birthday, she notes, is only five years and six months away.

She's quick to note she already has planned her funeral and appointed Norm and B.J. Chimenti, Jay and Jan Tuthill and Tom and Judy Casten as party planners.

It should come as no surprise that she plans on maintaining her sense of humor, no matter what the future holds.