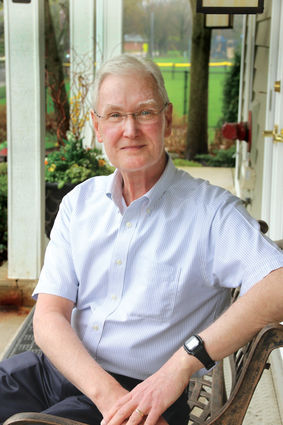 Five years ago, Jim Horn retired after practicing law for more than 35 years.

"To be honest, I did not have a plan going forward other than to just withdraw from the professional world and live a healthy lifestyle and wait and see what might appear or become interesting or capture my imagination," he said.

What captured his attention was a diagnosis of stage 3 prostrate cancer after his physical in February 2016.

"I was absolutely shocked," he said, noting that he had been active and in perfect health all his life. "That was my first reaction, and then, as the awareness increased, I felt genuinely primal fear."

He also experienced a period of withdrawal and planned to keep his diagnosis from most of his family. His wife suggested he go to Wellness House and, despite reservations, he agreed.

"One of the first things I learned at Wellness House is don't do cancer alone," he said. "You need to have a medical team that you have total confidence in, and you need a community of other cancer patients and survivors and caregivers to help you go through."

In June 2016, doctors removed the entire prostate gland and some surrounding tissue. Forty radiation treatments followed in June and July of 2017 and then two years of androgen deprivation therapy to reduce his testosterone levels. The radiation was effective and left with him a PSA level of 0.00, where it has remained for almost two years.

Horn said once he accepted his cancer, he was able to approach it with a positive attitude and an assurance of the outcome.

"I just knew it. Intuitively I thought, 'OK, I have an illness and I have the best health care in the city of Chicago and the state of Illinois and I will succeed. ' "

In addition to his doctors at Northwestern, he credits his deep faith, the support of family - especially wife Judy and daughter Shannon - and Wellness House with supporting his optimistic approach.

Encouraging others to get an annual physicals and appropriate screenings has become a calling for Horn, who once planned to become a Catholic priest. He said he thinks people postpone visiting their doctor because they don't want to receive bad news.

"Many of us have so many defense mechanisms that try to assure ourselves, 'I'm perfectly fine. I'm healthy. I'm at full capacity and I'm going to live to 100.' "

And while he wouldn't wish cancer on anyone, he said there are benefits to "taking that journey."

"When you are facing the prospect of death and you really come face to face with your own mortality, it brings you alive," he said. "I have had a very blessed, fortunate life, but I am even happier now."