Hinsdalean to partner with American Legion 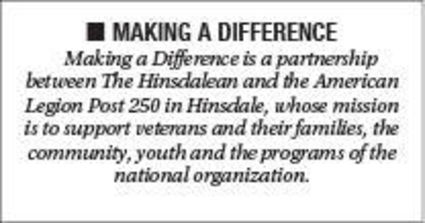 Hundreds of organizers gathered in Paris March 15-17, 1919, with the goal of supporting veterans who served in the Great War.

A committee tasked with naming the new group had a dozen options from which to choose, including the Liberty League and Society of the Great War.

American Legion was selected as the working name. It stuck and now, a century later, the organization is celebrating all it has achieved since its founding.

And those accomplishments are impressive.

The American Legion, with help from the William Randolph Hearst newspaper group, spent eight months convincing Congress, the military and the public that free college education, 52 weeks of readjustment pay, home loans with no down payment and other benefits would stimulate the economy and not break the U.S. Treasury. The campaign was successful and the Serviceman's Readjustment Act of 1944 - more commonly knowns as the GI Bill, was signed into law by President Franklin D. Roosevelt on June 22.

In the aftermath of natural disasters and the terrorist attacks of Sept. 11, the American Legion family has stepped in to provide life-saving relief, funds and support. The organization's National Emergency Fund, established in 1989, recently has supported cleanup and repair efforts following hurricanes in Texas, Florida and Puerto Rico. Legionnaires work with groups like the Red Cross and Team Rubicon to assist those in need.

The portfolio of American Legion youth programs at the national, state and local levels is designed to strengthen minds, bodies and understanding for young people as they transition to adulthood, regardless of whether they join the U.S. Armed Forces.

Posts across the county are participating in a variety of events to commemorate this milestone anniversary, as is the American Legion Post 250 in Hinsdale. Post 250 will celebrate its centennial at a special dinner Friday, Nov. 9.

In the meantime, we are happy to announce we will work with the post under our "Making a Difference" partnership over the next eight months to share the history and accomplishments of the group over the past 100 years.

Readers will learn more about post members, ways the American Legion supports youth in Hinsdale and neighboring towns and initiatives of the Ladies Auxiliary. We'll highlight the post's involvement in Memorial Day and Veterans Day commemorations. We'll also share some fascinating history and take a look at what the future might hold for this post and others across the country.

Of course, we're familiar with the post's involvement in Memorial Day and Veterans Day commemorations, and we've written about some of the essay contest winners. But this partnership will give us an opportunity to take a more in-depth look at the ways it has served Hinsdale and surrounding communities.