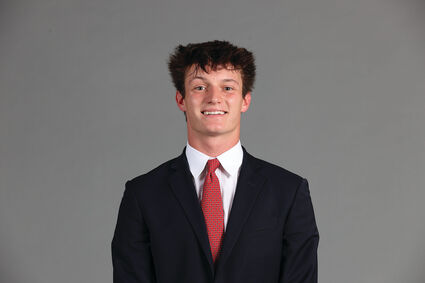 Miami University's Trystan Lundgren and Carnegie Mellon University's Rachel Fuechtman, both of Hinsdale and 2019 Hinsdale Central graduates, have contributed to the success of their respective school's swim programs over the last four years, just as they helped Red Devil swimming excel during their high school tenure. (photos courtesy of Miami RedHawks/Carnegie Mellon Athletics)

Hinsdale Central's Class of 2019 alums are in their senior year of college. That includes former Red Devil student-athletes - and Hinsdale natives - who have distinguished themselves at the collegiate level. The Hinsdalean recently caught up with three of them.

Rachel Fuechtman remembers being both excited and overwhelmed as she prepared for life at Carnegie Mellon University in Pittsburgh four years ago. Being part of the CMU swim program's incoming class turned out to be a "game changer," she said.

"We had each other's contact info and communicated a lot before getting to campus, so we each knew a solid 30 people coming into college already," Fuechtman said. "People would come up to us and ask if we were longtime friends, but we'd only know each other for like a week or two."

That support system proved vital throughout all of her athletic and academic trials, she said.

"The training staff and coaching staff all expect you to have it all together, so I've tried to live up to that," Fuechtman observed. "A lot of the students thrive under that Type-A pressure."

A freestyle sprint specialist, she recalled a dual meet against rival Case Western Reserve University her freshman year as an early highlight.

"My teammate and I went (first and second) in the 50 free. I remember that being a really cool and unique experi-

"I believe we won the meet," she added.

Weathering the pandemic was hard, but she said to stay active she discovered a new passion in rock climbing.

She's stayed in touch with her former Red Devil teammates, and was dazzled when she visited the school's two-year-old aquatic center last year.

"It's just absolutely incredible," she remarked.

"I'm excited for what the future holds," she said.

"It was awesome. We got rings. It was the first time I ever got a ring," he said.

Earlier that season he had notched 150 all-purpose yards for the Fighting Hawks against highly ranked South Dakota State.

"It felt great just to contribute at that level against such an elite program," he said. "That was just a lot of fun."

He finished the season ranked second in all-purpose yards in the Missouri Valley Conference, earning him All-MVFC Honorable Mention distinction.

The running back and kick return specialist's arrival in Grand Forks didn't begin ideally, however.

"The start of freshman year I was coming off ACL/meniscus surgery," Skokna said.

He was put on the scout team and performed well enough to make the active roster.

"I played the last six games of the season. That was very rewarding coming off an ACL injury," he said.

In the second-to-last game of the season against Southern Utah, Skokna ran for 114 yards on 11 carries and two touchdowns in a home victory.

"That first college touchdown was something I'll never forget," he recounted. "That was huge for me for my confidence and feeling that I could play at this level."

Playing in a domed stadium keeps the harsh winter elements out and the fans' cheers in.

"There's nowhere for that noise to escape, so it's very loud and creates an electric atmosphere," he said.

He will receive his education degree in the spring, with plans to be a physical education and special education teacher. He currently works as a para-educator at a local elementary school.

His senior campaign was also marred by injury, but he'll use his remaining eligibility to stay with the program.

"I love my teammates and everything that comes along with playing this game," he said. "That's why I work so hard to leave it all out there on the field."

He and his RedHawks reached the top the following season.

"I competed in 200 IM, 200 breaststroke and 100 breaststroke," Lundgren said. "Just being able to swim at that conference meet was pretty special. After receiving that first place team trophy, we all jumped into the diving well and were all going crazy. That was a pretty cool moment."

"It's kind of like a brotherhood, where we all hold each other accountable academically and athletically," Lundgren said.

Competing at the college level has been a broadening experience, he added.

"The training aspect is a lot more challenging. But the camaraderie of everybody encouraging each other, and being able to race people older and faster than myself motivated me to try to excel in my events," he said.

Participating in meets at Big 10 schools like Northwestern University and University of Michigan were fun opportunities. 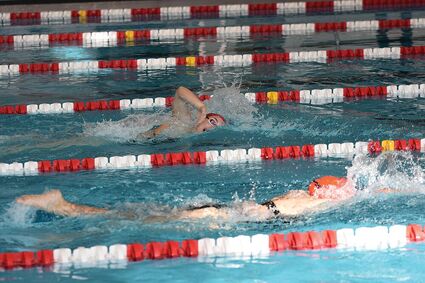 "When we went to Michigan in Ann Arbor, our women's field hockey team was there competing at the same time, so we were able to cheer for each other," Lundgren related.

The business marketing major felt well equipped to balance school and sports from his time at Central, while gaining new gifts on campus.

"I understand time management and how to take care of myself while also participating in sports," he said. "I think I've definitely been able to mature through my college experience by building a social structure and connecting with people from a lot of different places."

He expects the upcoming senior celebration meet to be emotional.

"My family will be there and it'll be my time to be recognized, almost like a goodbye," he said, adding it will signify the end of a long competitive swim career. "I will miss it, for sure."