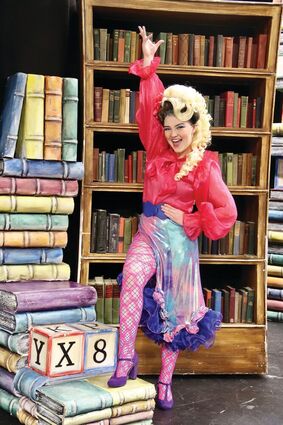 Tess McArdle's portrayal of Mrs. Woodworm in "Matilda" gives the Hinsdale Central senior a chance to showcase her dancing skills on The Community House stage.

Those who attend the Stage Door Fine Arts production of "Matilda the Musical" should come prepared for an evening that includes a little bit of everything. From tender songs that evoke tears to outlandish characters that are sure to make people laugh, Stage Door co-founder and artistic director Don Smith said the musical version of Roald Dahl's story has it all, including a little bit of theater magic.

Through a soundtrack that goes from softly sung ballads to boisterous dance numbers that include the entire cast, "Matilda the Musical" tells the story of a little girl with special gifts and the adults who fail to appreciate her extraordinary abilities, intelligence and personality.

"She's over the top," the Hinsdale Central senior said.

The role puts to work McArdle's dancing abilities as her character tangos and salsas with her partner, Rudolpho, in songs like "Loud," in which Mrs. Woodworm mocks sweet teacher Miss Honey and Matilda for their love of books.

Smith said he and fellow co-founder and artistic director Paula Taylor have known for years that "Matilda the Musical" would one day be performed at Stage Door.

"She called me from London," Smith said of Taylor, who had just seen the show and called to share her excitement.

After waiting several years, Smith said the time is finally right to bring the show to Hinsdale.

"We have a really talented group of younger actors," he said, as well as a strong corps of older actors, both of which are needed to fill out the large and diverse cast.

Interest in the show was high from the start, Smith said, which resulted in 90 young actors ranging from second grade through high school being placed into three different casts. Some cast members perform with more than one cast. McArdle, for example, plays Mrs. Woodworm in the Mighty Cast and is a featured dancer in the Battle and Strength casts.

For Smith, the song "Revolting Children" is among his favorite scenes in the show. It's the moment when the kids finally overpower their evil headmistress.

"It's a huge, powerful musical number," he said. "It's awesome."

The show's professional set, rented from a theater in Philadelphia, arrived on a 53-foot semi just weeks before opening night. It's extravagant, Smith said, with towers of letters, stacks of books and floating papers.

Coco Crooks first stepped onto the Stage Door stage as a second grader. Now an eighth-grader at Clarendon Hills Middle School, she's using her years of experience in the lead role of Matilda in Stage Door's Battle Cast.

"Matilda is very young, but she's very, very smart," Crooks said of her character. Matilda's mind isn't just for conjuring up facts or solving math problems. She also can use it to move things.

While McArdle's big moment comes in a song called "Loud," Crooks is called upon to showcase her singing and acting talents in "Quiet."

"It's a softer song," she said, with beautiful music and lyrics.

It isn't one of Matilda's big numbers, but Crooks said one of her favorite parts of the show is "Chokey Chant."

"Even though it's a little gruesome, it's so fun," Crooks said of the song in which the older kids at Crunchem Hall warn the younger children of what happens when they're sent to chokey, a small cupboard lined with sharp objects in which the child-hating headmistress Miss Trunchbull locks disobedient children. According to the song's lyrics, it's a place that "when you scream you don't know if the sound came out or if the scream in your head even reached your mouth." 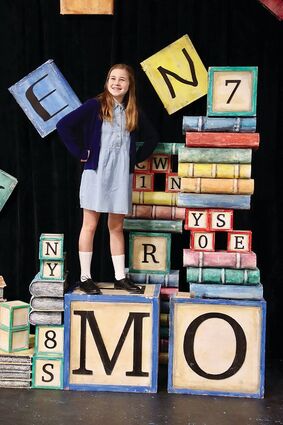 Songs like "Chokey Chant" and "Quiet" are just a couple of the many songs Coco Crooks looks forward to singing as the lead character in Stage Door's production of "Matilda." (Jim Slonoff photos)

"It gives me goosebumps every single time," Crooks said of the scene, which features choreography performed by the oldest members of the cast.

Although she is 14 years old, Crooks' character is just 5. And though Matilda doesn't act like a typical kindergärtner, Crooks said she has to change her voice to sound younger for the role. She also has to speak and sing in a British accent.

"Everyone who speaks or sings in the show does it with a British accent," Crooks said. "It's definitely a challenging part of the role."

Those who hope to experience Matilda the Musical are encouraged not to wait. Smith said nearly half the shows were sold out a full two weeks before opening night. He said those lucky enough to attend will see a heartwarming story told by some of the community's most talented young people through song, dance, acting, and a little bit of special effects magic.

What: “Matilda the Musical” by Stage Door Fine Arts