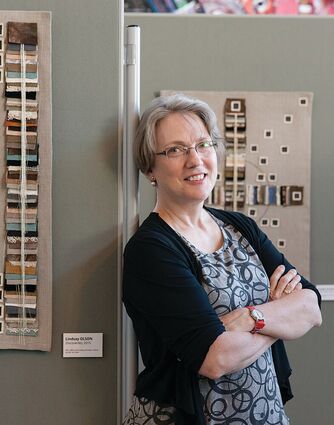 Artist Lindsay Olson creates works to demystify science, like those in her upcoming exhibit at the Hinsdale Public Library that she hopes will encourage people to approach fields like particle physics with a greater curiosity and appreciation. (photo courtesy of Bree Corn)

How can art help illuminate the world of science?

Artist Lindsay Olson had tried her best to steer clear of math and science subjects.

Then about a decade ago, while canoing down the Cal Sag Channel with her husband, she was struck by the sight of a sweeping engineered waterfall.

"Finding out who built this structure and why led me to the Metropolitan Water Reclamation District," Olson recounted.

After about a year and a half of "patient pestering," she said, MWRD officials allowed her inside the treatment facility to translate the process through her medium.

"I thought I could learn some science from the engineers to tell the story of what happens to our water," she said. "That was the moment of my epiphany."

Olson's subsequent journey led to her exhibit, "Art, Science and the Elegant Universe," which soon will be on display at the Hinsdale Public Library. The library will host an artist's reception Thursday, Jan. 26 (see Page 18 for details).

"Both scientists and artists thrive on uncertainty and a sense of adventure," Olson's website declares, and her textile artwork aims to illustrate that.

Her journey has included a partnership with Fermilab, where she helped establish an artist in residence program at the nation's preeminent underground neutrino facility for high-energy particle physics. She even traveled to Switzerland to see the Large Hadron Collider, leading her to create a triptych of the world's biggest particle accelerator, which is part of her library exhibit.

"I wanted to convey a sense of the power of the magnets and the hugeness of the collider rings," she said. "I consider myself an ambassador for Fermilab and the science my work highlights."

All the while the former science-averse Olson was getting a crash course in physics, alternating between her sketchbook and her scientific learning notebook, she said.

"I'm interweaving the learning and developing the art at the same time," she said. "I work hard to learn and convey accurate science in my work."

Olson's pursuit of inspiration has also taken her aboard a research vessel in the Atlantic Ocean and into the hidden vaults of the Field Museum. She feels validation when scientists give her positive feedback.

"When I've showed them the work, they could absolutely see the science in it," she said. "It's a great experience for me as an artist."

Olson is gratified to have found her niche.

"It's taken me a really long time to really use my training in a way that was meaningful for me," she said. "My art isn't just decorative. It's meant to be out in the world helping people appreciate science in a way that's more accessible for them."

For those interested in a deeper dive, Olson will give a talk on art and high-energy physics at 7 p.m. Wednesday, Feb. 15, at the library.

She said her mission is to "shrink the distance between the viewer and the ideas I'm expressing. It's just a way of helping people feel more comfortable in connecting with these concepts."