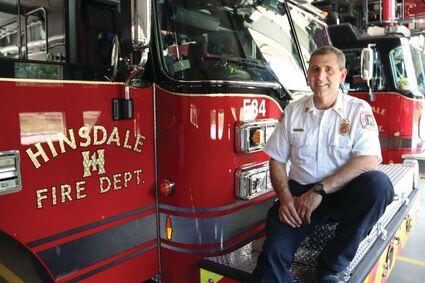 Deputy Chief Jon Carlson of the Hinsdale Fire Department said a law requiring smoke alarms to have sealed batteries, which went into effect Jan. 1, will mean less maintenance for homeowners and keep them safer. (file photo)

What is the new law regarding smoke alarms?

Homeowners might have more than one reason why a smoke alarm isn't working.

"They go dead maybe when you're on vacation, so you don't hear the chirps," said Deputy Chief Jon Carlson of the Hinsdale Fire Department. "You don't test it, so you don't know it doesn't have a useful battery in it."

Or a homeowner might take the battery out of a beeping detector, intending to replace it, and then forget.

A law passed in 2017 addresses these situations by requiring home smoke alarms to be equipped with 10-year sealed batteries by Jan. 1.

"More than anything, it just helps the detectors to be more reliable because you don't have to do as much maintenance to it," Carlson said.

According to the Illinois Firefighters' Association and the Illinois Fire Safety Alliance, there were 97 house fire deaths in Illinois in 2021 - and almost 70 percent of those deaths were in homes without working smoke alarms.

Homeowners do not need to run out to buy new alarms immediately. Those installed in homes prior to this year can remain in place until they are 10 years old, according to Public Act 100-0200.

The new alarms are more expensive up front, Carlson noted, but do not require the purchase of a new 9-volt battery every year.

"I think they're between $25 and $30 a detector, compared to $10 or maybe even less, depending on how low of a brand you go," he said. "Over 10 years of having to replace (the battery) at least annually - we recommend it twice a year when you change your clock - that would add up to be pretty similar to the cost of the new detector."

Smoke detectors should be installed in bedrooms and on each level of the home. Carlson reminded residents that carbon monoxide detectors also should be placed within 15 feet of sleeping areas.

"We recommend that if you're buying a new one that you would get one that has a big display on it," he said, to quickly spot if the battery is low or carbon monoxide levels are rising.

Following the new law is the homeowner's responsibility.

"We won't be going door to door," Carlson said, noting that firefighters will check a detector when on an ambulance call.

"If we notice the detector is out of date or there is a problem with the detector, we would say, 'This is what the law says,' " he explained.

Homes built after 1988 that already have hard-wired alarms or wireless integrated alarms are exempt from the new law. Sealed batteries also are available for hard-wired alarms, and Carlson recommends purchasing them.

He recommends writing the date the alarm needs to be replaced on the outside edge when it is installed.

"Residents are welcome to call us if they need help installing them or have further questions," Carlson said.