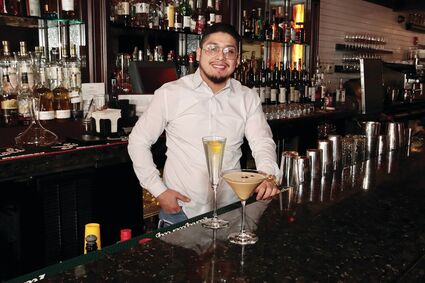 Angel Rangel, assistant manager and bartender at Il Poggiolo, suggested a French 75 or espresso martini for those who are looking to ring in the New Year with something other than Champagne. (Jim Slonoff photo)

What are some choices for NYE toasts?

For centuries, the sparkling wine known as Champagne has been used to celebrate birthdays, promotions, marriages and of course, the arrival of a new year. And according to Angel Rangel, assistant manager at Il Poggiolo in Hinsdale, it's not something to be messed with.

"Champagne you want to keep the way it is," said Rangel. While Rangel believes Champagne is best enjoyed on its own, it is not the only way to mark a special occasion. Rangel said there are many beverages worthy of helping to ring in the new year.

Champagne's dry cousin, prosecco, is just right for creating a number of celebratory beverages, Rangel said. Made from grapes grown in the Veneto region of northeast Italy, prosecco has a drier, less complex flavor palette than can add sparkle to a number of drinks, including one of Rangel's favorites - the French 75.

Made with gin and lemon juice and topped with prosecco, it's a cocktail that can be enjoyed year-round. The bartenders at Il Poggiolo add blood orange syrup to give their version a wintery twist, Rangel said.

The French 75 can easily be converted to a non-alcoholic drink by substituting sparkling water or soda for prosecco and leaving out the gin. Rangel said he creates a French 75 mocktail by combining sparkling water with lemon juice and apple cider and adding a garnish of mint or cranberry for a festive touch.

"Garnish always makes a difference for a cocktail," Rangel said. "You know it's going to taste good just by looking at it."

Rangel has been creating tasty concoctions behind the bar for nearly a decade and will celebrate his fifth year at Il Poggiolo in May. He said that since the pandemic, people seem more willing to try new things and add new flavors to their drinks. But guests who order signature drinks like the limoncello basil martini or winter in Sicily cocktail want to get what they're expecting every time.

Consistency is key, he said, but the bartenders at Il Poggiolo are always willing to tweak a drink to meet the customer's personal palate. That includes creating a mocktail version of popular drinks like the mojito or Moscow mule. As with the French 75, the key to creating a non-alcoholic version of any drink is sparkling water, Rangel said. He prefers San Pellegrino.

On New Year's Eve, champagne toasts are often preceded by an evening that might include a few cocktails. Rangel said it's important to space out drinks and to stay hydrated with water. He also suggests consuming carbohydrates like bread or pasta.

"That way everyone can make it home safe," he said.

Rangel said his personal choice for the New Year's Eve toast is a classic flute of champagne. From the sound of the cork pop to the sparkle of the bubbles, he said a champagne toast engages all of the senses.

Finally, he has a suggestion for those who need a little help waiting for the ball to drop. An espresso martini, made with equal parts vanilla vodka, chocolate liqueur and espresso, offers a caffeine jolt and a tasty sip for the hours leading up to midnight.

Of course, not everyone prefers to stay up late. For Il Poggiolo's youngest customers, and anyone who prefers an earlier bedtime, the restaurant offers a 7 p.m. toast to the new year on Dec. 31. With their drinks of choice in hand, everyone is invited to ring in the new year.