'Twas the night before Christmas in Hinsdale 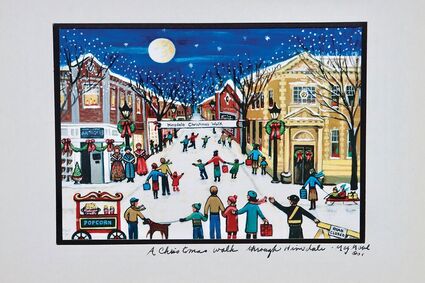 ’Twas the night before Christmas, when all through the town

The Hinsdaleans were scurrying, they rushed all around.

For last-minute gifts and cards they did sprint,

Armed with lists and ideas and maybe some hints.

Gateway and Grant squares and downtown they traveled

But with each stop, their nerves did unravel.

The hustle and bustle had dampened their mood.

They were tired and cranky and needed some food.

They stopped for some lunch and looked over the list.

To finish their shopping, they knew they’d persist.

But they wanted much more than to just finish this chore.

The true meaning of Christmas they hoped to explore.

Where to find it, they wondered, as they ate their last bites.

And parties and dinners made all their friends glad

But the cooking and cleaning often left them quite sad.

They looked out the window like small boys and girls

And noticed that snowflakes were starting to swirl.

The flakes grew bigger — and so did their smiles.

Perhaps they’d stop rushing, if just for a while.

The sun shining bright on the new-fallen snow

Made the trees and the buildings look all aglow.

With food in their bellies and a light in their eyes

They paid, left a tip, bid the waitress goodbye.

Out into the snow they stepped with great haste.

The day was half over — they’d no time to waste.

Jewelry and candy and toys they did buy.

They finished their shopping in the blink of an eye.

Then they strolled down the walks and admired their town

They noticed some carolers out spreading good cheer

On this, a most special day of the year.

Their eyes, how they twinkled! Their dimples, how merry!

They sang out their carols with love and with joy,

Bringing smiles to the faces of each girl and boy.

After singing and humming they walked to the pool.

Not long after that, they reached the kids’ school.

They loved all the teachers and the principal, too.

They were lucky to have such great schools, they knew.

A park they did pass as they journeyed along

Where they had spent summer months in play and in song.

They walked still some more and looked up the hill.

The view of village hall still gave them a thrill.

The town, they were reminded, had so many treasures.

Living here brought them so many pleasures.

The smell of Kramer’s when they walked in the door,

The chamber and humane societies were assets to town.

They loved the library and all it did lend,

The firefighters and policemen on whom they depend,

Their friend Robert Frost, writing poems in the park,

The lights on the trees twinkling bright after dark,

Neighbors and friends so delightful to know.

They continued their walk, by a church they did pass.

They heard the first sounds of the 5 o’clock Mass.

In churches nearby, pews soon would be filled,

And the hustle and bustle would finally be stilled.

They felt peace in their hearts and joy in their souls

They had gotten so much from this Christmas Eve stroll.

Their frantic, anxious mood had experienced a shift

As they walked ’round the village and saw all its gifts.

These blessings, they knew, were a gift from above —

“Happy Christmas, dear Hinsdale, and to all a good night.”