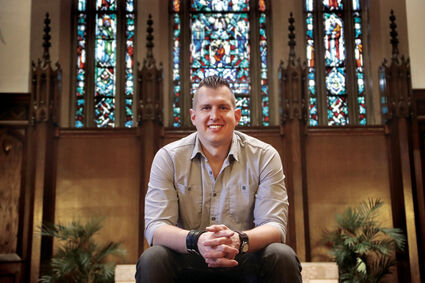 Like many teenagers, Grant Glowiak didn't consider himself the smartest, most athletic or most talented of his peers at Lyons Township High School. But at his church's youth group, none of that mattered.

"Standard cliques didn't necessarily apply in that space," said Glowiak, who grew up attending First Congregational Church in his hometown of Western Springs. Now, as associate pastor and director of youth ministries at Union Church in Hinsdale, Glowiak said he wants to create an equally safe place where teens know they don't have to perform to be accepted and loved.

"My love for them is not based on what their highs and lows are," Glowiak said. "They're worthy of love simply for being children of God."

Glowiak's job isn't one that's easily left at the office, but that's something he said he knew when he and his wife, a lifelong member of Union Church, decided to move to Hinsdale in 2019.

"That does not bother me. I like being part of the community," said Glowiak, who joined the staff of Union Church in 2015 and was ordained in 2021.

Glowiak graduated from Grinnell College in Iowa with a degree in religious studies, and although the curriculum was academic rather than faith-based, Glowiak said the people he met at college made him even more aware of the needs of others and more dedicated to fighting for social justice and equality.

The years following graduation prepared him for ministry, as well. Glowiak took on the role of caregiver for his father, who was suffering from Alzheimer's disease. Glowiak said the response of his church to his family's situation helped to solidify his decision to complete his seminary work and become an ordained minister. He spent nine years attending Chicago Theological Seminary part time to qualify for ordination.

As director of youth ministries, Glowiak said he wants to help the church's youngest members find compassion for those in need and the passion to work toward change.

"There are a million worthy causes in the world," said Glowiak. Through activities such as work tours, he exposes young people to some of those causes and challenges them to answer the question, "Who makes your heart hurt most?" The answer to that question, Glowiak said, reveals the place where that person is most likely to make a difference.

Glowiak said his interest in social justice drew him to Grinnell, and he remains dedicated to those issues as an ordained minister. He said he encourages members of his church to make an effort to understand things like gender issues, rather than just write them off as something wrong.

Ultimately, Glowiak said, his job is to convey the messages of the Bible, God and Jesus. In addition to leading youth activities, Glowiak preaches regularly. Often, he said he finds himself speaking not just about the needs of others, but the needs of his own congregation.

"We all have a hole to fill," he said. It's a hole that can't be filled with money, cars or big houses.

"The way you fill that hole is by serving others."