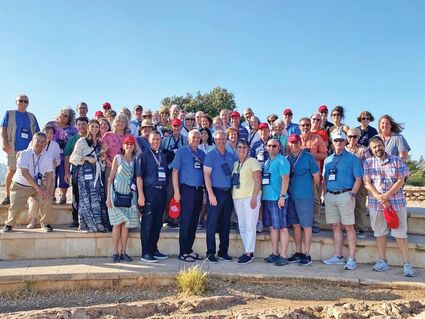 The Rev. Burke Masters took a group of about 50 - including several members of St. Isaac Jogues Church, where he is pastor - to the Holy Land in October. Also on the trip were Bishop James Wall and Deacon Tom Thiltgen. (photos courtesy of Masters)

When the Rev. Burke Masters leads Christmas worship at St. Isaac Jogues later this month, his preaching will be informed by his visits to the Holy Land.

"I knew this was real, but there's a depth to the reality after going," he said. "I knew there was a Bethlehem, but when you go to Bethlehem, it was like, 'Oooh, it was here.' Whenever I read (the story of Jesus' birth), it sends chills down my spine."

He made his sixth trip to the Holy Land - and his second this year - in October.

"I always had a desire to get to the place where Jesus walked and talked and lived," said Father Burke, who became the pastor of St. Isaac Jogues this summer.

"They call it the fifth Gospel because it just brings the other four Gospels alive," he said. "It's just something to go to church and hear the readings and say, 'I've been there - I've seen it,' and it just makes it become 3D."

The itinerary is packed with sites including Basilica of the Annunciation in Nazareth where the angel Gabriel appeared to Mary, Mount Tabor in Lower Galilee where the transfiguration occurred, the Sea of Galilee, the site of Jesus' birth in Bethlehem and the tomb where He was buried in Jerusalem.

The first time Father Burke traveled to the Holy Land, he was in Bethlehem on Ash Wednesday.

"Wherever you go you celebrate whatever happened there," he said. "In Bethlehem it's always Christmas Day. We were singing Christmas carols and receiving ashes on Ash Wednesday."

The trip can be overwhelming, even for a priest.

"Now when I go, I know what's coming and I can really enter into it," Father Burke said. "I'm worried less about taking pictures and I'm focusing more on prayer and entering into it. Every group is different and the interpersonal dynamic is so beautiful."

Hinsdale resident Peggy Smego, who traveled to the Holy Land with Father Burke in July 2018 and again in October, shared similar thoughts on making a second trip.

"The first one, I felt like all I did was look left and right, left and right. Your eyes can't take in everything as fast as you can see it," she said.

"Then I had a chance to go back and really just sit with whatever site we were at," she added. "My eyes had already seen it, so now my heart was able to just sit with the spaces and imagine it all in Jesus' time.

Smego's favorite stop on the tour was the site least touched by human hands and the one that opened up her imagination.

On five of his six trips, Father Burke said the most powerful experience was celebrating Mass in Jesus' tomb.

"The first time, I was so focused on, 'This is where he was buried,' it was kind of a sad feeling," he related. "Then when I left, I thought, 'That's where he rose from the dead, too. This is where the whole center of our faith happened.' "

On his most recent trip, he was particularly touched by the married couples renewing their vows in Cana after 30, 40 and even 50 years together.

"What strikes me is when they say for better or for worse, in sickness and in health, 'til death do us part, only they know what those words mean now," he said. "They probably had no idea what was in store for them. Now they do and they're still together."

In the evenings, after eight or nine hours of touring, the group of 50 travelers enjoyed eating together at the hotel and sharing their stories of the day. At the end of the pilgrimage, they share graces, he said, and they do so again at a reunion a month after they return home.

"What we hear a month later is, 'This has stuck with me and it changes the way I pray. When I pray with the scriptures now, it's so much more real.' I love to hear when people say, 'This has changed my life,' " Father Burke said.

"I think for some people, faith is maybe just kind of going through the motions at times. I think the biggest leap goes from 'I know this is real' to 'I know this is real,' " he said, pointing first to his head and then to his heart. "They say the longest distances in the world is 12 inches, from your head to your heart."

Smego said her trips brought the scriptures to life and will add a depth to her celebration of the Christmas season. 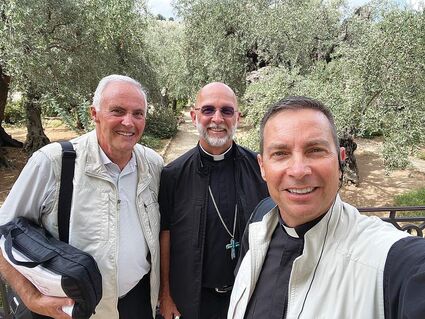 "If you've never been there, you're still just taking their word for it. You get to go and then you see, and that just adds to your experience," Smego observed, adding that she reads scripture with new eyes, new ears and a new heart.

Father Burke's previous job was in adult formation, and he planned several trips as part of that position. This year he also walked the 500-mile Camino de Santiago in France and Spain in the spring and traveled to see the Passion Play at Oberammergau in Germany in July. Even though his professional responsibilities have changed, he said he will continue to travel.

"I'm going to keep using vacation now to do these trips," he said. "They are fulfilling for me."

And he has witnessed how fulfilling they are for others.

"I'm on a mission to take people over there because it changes people's lives."