Mom of four is no stranger to PTO presidency 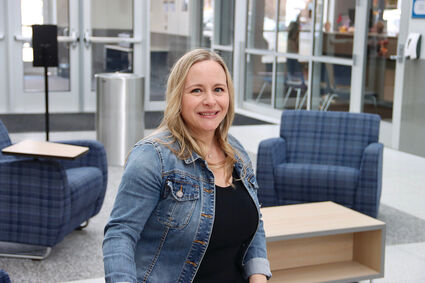 Kristin Sweis discovered her knack for fundraising as a member, treasurer and eventually president of the Elm School Parent Teacher Organization. It didn't take long for others in the village to discover it, too.

With two daughters enrolled at Hinsdale Middle School, members of the school's PTO approached Sweis with an invitation to step in as president this year. The invitation likely was a result of her success at Elm, Sweis said, where during her two years as president the PTO installed a kickball field, a zip line, a pavilion for the school's prairie garden and a play structure called a gaga pit.

"That was the beginning," said Sweis, who remains active in the Elm PTO's fundraising efforts while leading the HMS PTO to bigger and better things.

Sweis is the mother of four daughters - eighth-grader Elisa, sixth-grader Ava, 8-year-old Keira and baby Genevieve, who was born in November. With so many years left in the District 181 schools, Sweis said her commitment to making school the best it can be for her children and others runs deep.

At neighborhood schools like Elm, parents and children often know one another outside of school. That changes in middle school, where students from different areas of town and even other towns gather in the same classroom. Sweis said one focus of her leadership is to create ways for HMS students and parents to meet.

"We're bringing back parents night out," Sweis said. Parent nights invite HMS parents to a local restaurant to meet, eat and drink while donating a portion of their purchases back to the school.

School parties, called school dances by some, also are making their post-COVID comeback.

"We're really trying to get people out to meet each other and socialize," Sweis said.

Parent involvement in events like the school book fair, T-shirt sales for Unity Day and the sixth-grade field day has been ample, Sweis said.

"Parents want to be involved," she said.

Nearly 70 percent of HMS parents have paid the $40 annual fee to belong to the PTO. That membership, Sweis said, provides access to the school directory as well as the weekly email sent out each Sunday, The email keeps parents apprised of all that's going on at their child's school.

With COVID-19 restrictions largely lifted, Sweis said she brought back in-person meetings of the PTO and the PTO board, giving parents a chance to see one another. Both have been well attended, Sweis said.

"We chose this area because of the schools," Sweis said of her own family's move to Hinsdale. She said the PTOs of each school are there to make those already great schools even better. This year, the HMS PTO also will begin an effort to help kids in another school.

"We are working on getting a sister school," Sweis said. Students will have the opportunity to help students at a middle school with fewer resources. Grade levels will come up with their own ideas to help the sister school, such as collecting winter clothing, school supplies or sports equipment.

Sweis' duties as president include finding speakers for the monthly PTO meetings, leading board meetings and encouraging good working relationships between the PTO and school staff. Ultimately, Sweis said, she is responsible for seeing that the money raised by the PTO is properly spent.

"I take that very seriously," she said.