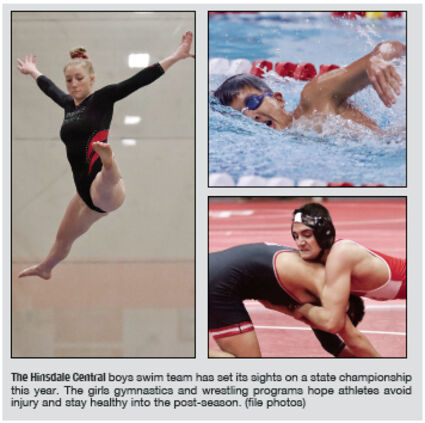 The Hinsdale Central athletes who compete in these winter sports will spend the next few months tumbling, stroking and grappling to the best of their ability, hoping to make it into post-season competition.

This is the second in a three-part series. Boys and girls bowling and hockey were featured Nov. 24, and the boys and girls basketball previews will run Dec. 8.

Strengths: I think they're all very hard working. A lot of them have improved over the off-season, so that's a huge help. I think our beam is - right now - one of our strongest events.

Who to watch: Senior all-arounder Charlotte French, who made state last year. All-arounder Audrey Austin, who is also a senior. She got hurt last year, so she didn't finish out the season. And all-arounder Hazel Hamelka. She's a junior. She has really improved over the summer.

Outlook: Hopefully we'll be in the top three in our conference and then do well in regionals and sectionals. We have a lot of work to do.

Furthermore: The girls are all great kids. They all work hard. You can't ask for much more.

Strengths: They put in a really good preseason, off-season training. We have lots of returning state swimmers.

Challenges: We have more state-level finalists than we do spots, so keeping everyone interested, engaged and motivated to surpass last year's finish will be probably our greatest challenge internally. (Externally) you can never count out the people who won it the year before, so Stevenson is going to be a challenge for us. They are very fast.

Outlook: Honestly our humble goal is to do better than we did last year - going after our 19th title. We're fortunate enough to be able to give an undefeated season a run. We're looking to improve on New Trier Relays and state. Through maturity and motivation, we've been able to fill a few of the gaps that were created through graduation. We don't have as many gaps as our opponents do.

Furthermore: I've been fortunate enough to coach a lot of very talented teams, to be able to work in Hinsdale for over two decades. This one's potential is up there and it will be a really fun season to watch, both on paper and in person.

Strengths: We have a senior class that's had some experience, despite the pandemic.

Challenges: Staying healthy, keeping our starters healthy. Wrestling is a long season. Depth is one of our challenges, getting more depth for the program. Our starters are pretty solid, but we're a little inexperienced on the depth chart. Kids are working hard, though. We've got a tough schedule once again.

Outlook: I don't know where other teams are at - if we can compete for regionals or conference. It just depends how everything lays out, how the season progresses. Kids are working hard. They have a tough schedule. We're training them hard, teaching them to be better human beings outside of wrestling. They learn a lot in this wrestling room and we push them every day so they can be successful later in life.

Furthermore: We have six girls out this year. Girls wrestling is taking off a little more in Illinois. We're trying to have girls wrestle girls vs. girls wrestle boys.