Pizza is in the eye of the beholder

Mick Weisz teaches me how to make my favorite, topped with one of his favorites 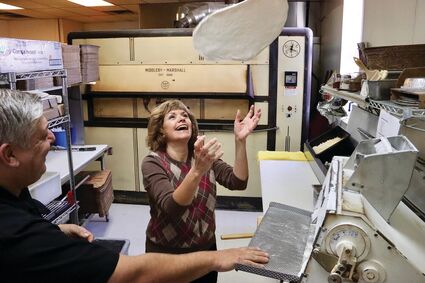 You don't have to throw the pizza dough up in the air to make a tasty pie, but it sure is fun. Giuliano's owner Mick Weisz did a great job teaching me how to make my favorite pizza on his menu, pizza margherita. (Jim Slonoff photos)

It's not nearly as complicated as the chocolate mousse cake chef Mick Weisz had to make for the final of his baking class in culinary school. Or many of the other dishes on the menu at Giuliano's, which Weisz owns with his wife, Cathy.

But it is delicious - especially when topped with roasted garlic paste, homemade tomato sauce, mozzarella, sliced tomatoes, goat cheese crumbles and basil, Weisz' version of a pizza margherita. It's my favorite pizza on Giuliano's menu - and has been for more than two decades.

When I arrive Monday morning, Weisz has already started preheating the oven to 450 degrees, which takes about an hour, as this is no ordinary oven. The 1942 rotary style pizza oven - which can bake 36 pizzas at a time - used to be a staple in Chicago pizzerias.

"A lot of places probably don't use them these days because there is a big footprint and they're not the fastest in the world and they cook pizzas a certain way," he said.

Then we grab a ball of dough which has been proofing for 24 to 48 hours, coat it in flour and send it twice through the dough sheeter, another piece of equipment Weisz purchased used when he open the restaurant 25 years ago.

"That and the oven are really a piece of American engineering that are pretty amazing," he said.

The dough is a basic concoction, made of pizza flour (which has a higher gluten content), eggs, salt, sugar, yeast and oil. The restaurant mixes up to 50 pounds at a time.

I place the dough on a board sprinkled with corn meal - to help it slide off into the oven - and use a cardboard pizza ring to cut it into a perfect circle. Then I start layering on the toppings, starting with the garlic paste and ending with the goat cheese, an unusual ingredient for this type of pizza.

The sauce is very similar to the one Weisz first started making when he opened the restaurant.

"It's not a really sweet sauce. There's not sugar in it really at all," he said.

While ingredients to his marinara sauce have remained the same, the quantity he makes has not. When the restaurant opened, he said he made about five gallons a week. Now he makes 40 and it doesn't always last seven days.

We slide the pizza into the oven where it bakes for about 20 minutes.

When it comes out, I sprinkle it with basic chiffonade and cut it into squares using a giant knife. My squares are not very even and I can't seem to cut all the way through the crust on the end pieces. (I will never complain about that when I order a pizza again!)

The pizza is delicious, which is why it's one of the restaurant's top sellers, along with the Giuliano's special, topped with grilled portobello mushrooms, sausage, house roasted green peppers and onions. 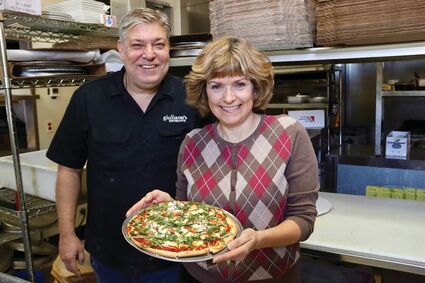 Weisz thinks the dough is the most important element of a pizza, as the crust is the foundation. "It's probably the trickiest thing to get down right."

Chicago is synonymous with deep-dish, pan-style pizza, but Weisz has a different view.

As a kid in Elmhurst, Weisz grew up eating pizza at Mama Maria's, Roberto's and Two Brothers. His favorite pizza is topped with sausage, hot giardiniera and goat cheese. Because of the type of oven he uses, the sausage can be put on the pizza raw, giving it extra flavor as it bakes. Speaking of sausage, the restaurant goes through about 200 pounds a week, along with 500 pounds of dough and four pounds of fresh basil, just to name a few ingredients. Those ingredients top hundreds of pizzas each week - 300 on a Friday night alone.

I'm happy with my one.