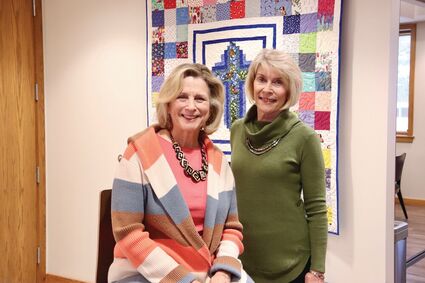 "Ralph Klein (former Lutheran School of Theology at Chicago professor) was the speaker at our 75th anniversary event, and he was trying to think ahead to our 100th, how life would be," related Lindberg, whose husband found the footage. "He said, 'Let me be the first to wish you Happy Anniversary in the year 2022.' Everybody was just stunned that we had that video."

It was a remarkable moment during a remarkably smooth series of commemorative activities. As preparations to mark the milestone began about a year ago, the ladies admitted that COVID-19 loomed in the background.

"We were hesitant in the beginning," Chapello said. "It was like, 'Let's make this calendar, but we might have to adjust it.' "

"We were worried, with the pandemic, how many people are really going to attend these events?" Lindberg added.

Fortunately the best-case scenario unfolded as all of the scheduled events came to fruition, kicking off with an opening party in May, the month the church was founded as an English-speaking offshoot of crosstown Zion Lutheran in 1922.

"It was actually very well attended," Lindberg said. "We had finger foods so people didn't have to touch everything."

Both said there was a palpable reunion-like spirit among celebrants as they gathered as a body to observe the historic occasion.

"It kind of was the end of the pandemic for them, in a way. Everything was so well-attended. They just seemed really happy to be together," Lindberg said.

A Trivia Night in June and an outdoor picnic in August were also highly successful. A time capsule was buried during the picnic.

"A lot of people came back for that that had not been in church since the pandemic," Lindberg said.

Then in October, two of the church's former music directors performed a concert.

"We had a great celebration of music and food and entertainment," Chapello said.

Retired longtime pastor Don Balster, now in his 90s, delivered his well wishes via video, and several of the church's recent interns recorded videos recounting their funniest moments from their experiences.

Chapello and Lindberg said they wanted the celebration to bridge the past and the present.

"We were trying to make it welcoming so other people outside of church could come in and participate - young and old and everybody in between to make it very inclusive," Chapello said.

The commemoration culminated in a special service and lunch Oct. 30.

A current Redeemer member traces his lineage all the way back to one of the six families that founded the church.

"That was a real risk for them, to break away from the German Lutheran church," Lindberg said of the pioneering families.

"I think if they could look forward 100 years, they would be proud," she said.

"Probably a little surprised," Chapello added with a laugh.