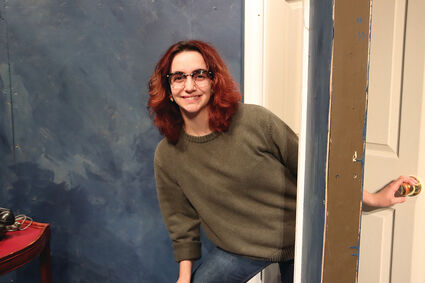 Hinsdale Central senior Mickey Norton said being part of the drama club has helped her find her voice over the last four years. "I am so much more confident now," she said. (Jim Slonoff photo)

How has acting enriched your high school experience?

An eccentric, sanctimonious woman with an alcohol problem? That's a character Mickey Norton can sink her teeth into.

The Hinsdale Central senior gets to show off her acting chops as Mrs. Peacock in the drama club's production of "Clue: On Stage" Nov. 17-19 in the school's auditorium (see Page XX for details).

"I'm an old lady who's batty and prone to hysterics," Norton related. "I can be wild as her."

A longtime fan of the 1985 whodunit comedy film (inspired by the classic Clue board game), Norton said the production elevates the closing act of her Central career.

"When it was first announced that we were doing 'Clue,' I was so freaking happy," she said. "It's so much fun."

Rehearsing with her fellow cast members generates much of the enjoyment as they each hone their portrayals - and prop work.

"I have this massive knife and a handbag that's too small for it right now, so I just have the hilt of this big knife sticking out," Norton said with a smile.

She enjoys being both in front of and behind the curtain, having served on crew for numerous shows over the last four years. Theater, Norton said, proved to be the big break she needed as rookie Red Devil.

"When I came (to Central) as a freshman, I knew literally nobody," Norton revealed. "I did the freshman show and immediately it was like, here are some people I can interact with on a daily basis. It really helped give me a stable footing."

Speaking of footing, she recalled practicing a shoe-throwing scene in that show in which the projectile flew into the mostly empty seats.

"He managed to throw it into the dark auditorium and nail someone right in the head," Norton recounted, thankfully resulting in no harm done.

As a senior she regards herself as a pseudo "parent" for the underclassmen in the club. She encourages them to trust their instincts when playing a role but also to be coachable.

"You need to know that you can make decisions, but you also need to listen when you're given direction," she said, citing choices like intonation or employing mannerisms. "Where are you going to put the stress in a line? So many people are terrified of making a decision and having it be wrong."

The multi-faceted Norton is even fashioning her own Mrs. Peacock wardrobe, and she also helps other with sewing needs. Her alter ego's penchant for pulling flasks of booze from various places on her person has been a source of delight for everyone.

Norton said her drama experience has taught her she can inhabit any part she puts herself fully into.

After the tough years of the pandemic, Norton looks forward to reuniting with audiences in laughter.

"It's so funny, and I feel like we all need funny," she said. "People can come in and know they're going to get a funny show."