The fundraiser for military personnel celebrates its fifth installment 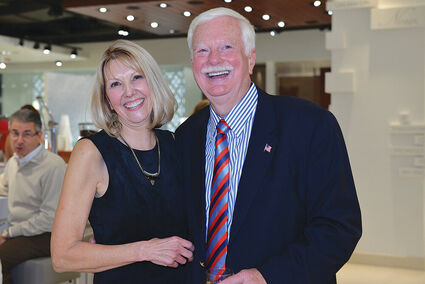 Red White & Blues organizers Chris and Dave Pequet of Hinsdale have seen the fundraiser raise $250,000 for Operation Support Our Troops since 2014. The funds go toward sending care packages to U.S. military personnel around the world. A performance by the Chicago Blues All-Stars is always a highlight of the evening. (photos provided)

In 2014, Hinsdale couple Dave and Chris Pequet were stirred to reach out to U.S. military service members overseas. On the recommendation of a friend they partnered with the west suburban-based nonprofit Operation Support Our Troops-America.

"We talked about having a cocktail party for my clients and Chris' clients and doing something that would support a military charity," Dave said.

The robust response from invitees alerted them that they'd need a bigger venue than expected.

"(Operation Support Our Troops) said, 'We've got a donor that owns a car dealership,' " Dave related.

So McGrath Acura of Westmont was converted into a gala site.

"They moved the cars out of the showroom and we brought tables in and had the event there," Chris said. "It's just been growing ever since."

At 7 p.m. this Saturday, Nov. 5, the Pequets will host the fifth Red White & Blues Gala at Pinstripes, 7 Oakbrook Center in Oak Brook.

"We're kind of bursting at the seams again this year," remarked Dave, himself a military veteran.

The gala will feature food, a silent auction and music from the Chicago Blues All-Stars - the meaning behind "Blues" in the gathering's name.

Dave said band leader Dr. Dan Ivankovic, an orthopedic surgeon by day, is also a big backer of their efforts.

"He's got a six- or seven-piece brass band, and every year he's donated the band's performance to the cause," he said.

The primary focus of OSOT is its Comfort and Care Package Program, with the agency having shipped more than 2 million pounds of items to those serving in harm's way.

"They send care packages to troops all over the world," Dave said.

OSOT also provides one-time funding to veterans and their families to help in recovery from financial hardships/crisis and sponsors three-day Leap of Faith seminars and healing experiences for Gold Star families, those whose loved one has fallen while serving.

Many participants then go on a parachute jump with Golden Knights as part of the program.

The nonprofit's G.I. yoga program teaches stress relief methods and tools to manage symptoms of PTSD and TBI free of charge to veterans and their families.

"We know that 99 percent of the dollars raised went to the charitable cause," he said.

Galas were held for three years in a row and again in 2018. The pandemic precluded in-person events the last couple of years, so the Pequets are delighted to be able to host one again. Chris said they never imagined the party would become a ongoing endeavor.

"It was just supposed to be a one-off cocktail party," she said. "After we did it, then everybody kept asking us, 'When are you going to do it again?' "

They look forward to adding to the more than $250,000 Red White & Blues has raised for OSOT through the fundraisers over the years.

"It's been rewarding with all the support that our friends have given us," Chris said. "Everybody wants to pitch in and help. It's very heartwarming."

The pair is particularly thankful for the emcee, former Chicago Bear Gary Fencik. 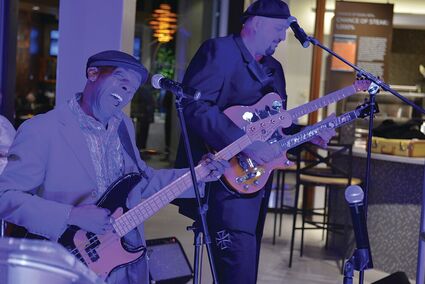 "He's a dear friend of ours and a great supporter. He's emceed it every year," Dave said.

The Pequets cherish the opportunities to talk with active duty troops and their families, who make sacrifices in the pursuit of defending freedom.

"We've met a lot of good people in the military," Dave said. "We see how hard it is on their families and their children."

"Our military is an impressive group of guys and girls," Chris added.

And with Veterans Day coming up next week, the timing seems right.

Tickets are $150 and are still available. Visit http://www.redwhiteandblues.org for more information.