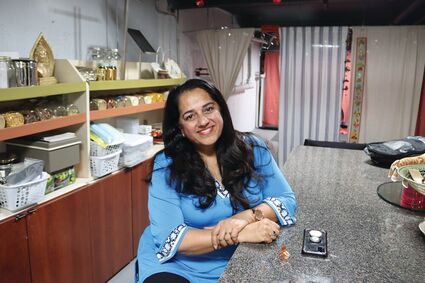 Local Ayurveda practitioner Deepti Suri will begin a new class at The Community House next week on plant-based cooking, including spreads with veggies, flatbreads and crépes with flours and beans, and rice dishes such as pulao and biryani. (photo by Jim Slonoff)

One doesn't have to be vegetarian or vegan to appreciate plant-based dishes.

A healthy diet can be full of flavor, as cooking instructor Deepti Suri demonstrated last week in her kitchen at her Yoga Habitat studio in Hinsdale.

"If you learn, you can make anything delicious," Suri remarked as she prepared a dish using split bean soup, or mung dal in Hindi, with herbs and spices.

Suri will teach part two of her Plant-Based Cooking series for four Thursdays beginning Oct. 20 at The Community House (see Page 26 for details). The Ayurveda and Unani cooking techniques draw on Asian, Indian and Middle Eastern cuisine and result in dishes believed to have salutary properties for common maladies.

"I show them how they can cook for their health," she said, noting mung dal's medicinal value. "Any kind of problem (people) have in their gut is healed."

The tantalizing aroma of Suri's spice-mixing fills the room. She recommends using a spice tray for easy access to commonly used seasonings, like cilantro seed powder and cumin powder.

"Everything is together," she said.

She mixes onions, garlic and ginger in a pan with cilantro seed powder and mustard seed before adding chopped spinach, tomatoes, water and green chilies. She said mustard seed should first be "spluttered" in hot oil.

"If you do not splutter it, it will stay hot in your body. By spluttering, you make it have a cooling effect on your body," Suri said, cautioning those with heartburn to avoid the herb. "Whether the temperature outside is cold or hot, you have to keep your body cool so you do not get acid reflux and do not lose your hair."

Mainline grocery stores typically carry the organic ingredients her recipes require, but she also likes to patronize small family-owned produce markets, such as Peter Rubi near her Plainfield home.

"You cannot make a list and go shop - you just buy what he has," she said.

Suri stressed that the order of adding ingredients matters.

"I'm going to change the sequence - what I add when - and the taste will change," she said.

Cooking was not a passion until her family settled in the States.

"My kitchen was my closet for nine years," she quipped. "I did not like cooking, and food was so easily available." Her daughter's food allergies heightened her awareness to cross-contamination in restaurant kitchens.

She pours the mung gal into the spinach blend and serves it with boiled potatoes and rice.

Indian cooking uses ghee, a clarified butter, and Suri adds it to the soup. For sensitive palates, plain Greek yogurt is good for mitigating spiciness. Suri characterized cooking as an art while, by the same token, asserting adolescents can learn it.

Students in her cooking class will also get a primer in making flatbreads leveraging their versatility.

"I have a PhD in making flatbreads," she jested.

With the celebration later this month of Diwali, the Indian multi-day festival of lights, she looks forward to sharing her culture. Her hope?

"They all become vegetarians," she said with a smile.