Family, friends, golf, scuba diving were among the things Tom McCleary loved the most 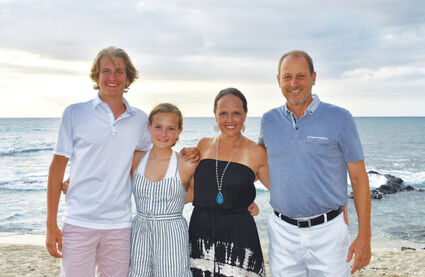 Along with the advice Tom McCleary gave his children just days before he died was a statement about what was most important in his life: "The best thing I did was have a family, one family, when I was ready." Tom was married to Megan and the proud father of Sean and Anna. "We were still madly in love after 25 years," Megan said. (photo provided)

Be nice to people.

Do it today, not tomorrow.

These are some of the tips for living a good life that Tom McCleary passed along to his kids just days before he died March 12 at the age of 63.

"He just rattled off all these things about how to get a good life," his wife, Megan McCleary said. "My son had typed them up in his phone in his notes."

He shared the advice shortly after learning there was nothing else doctors could do to treat the Stage 4 lung cancer he had been diagnosed with in May 2021. He died just three days after hearing the news.

Megan emphasized he was not a smoker.

"I feel like there is less empathy, sadly, for lung cancer because people think you bring it on yourself, which is wrong," she said.

The directives Tom shared with his children, and which were printed on the back page of the program for his funeral service, were not just empty phrases. They were the guideposts of his own life.

"He was different than anyone else I dated," said Megan, who met Tom on a blind date and described him as the man of her dreams. "He was always kind. He was smart. He was always positive, optimistic and he never wasted any time. Whether it be scuba diving or golfing, he was a liver and lover of life."

The two married in July 1997 and over the next few years would become parents to Sean and Anna, now 21 and 19. Tom took the same passion he had for life and for his wife into his role as a father.

"He was so excited and so proud of our kids and everything that they did, and yet he wanted them to do what they wanted," Megan said.

Sean said his dad always encouraged him and his sister, no matter where their interests led them.

"Unlike anybody else, he did not have an agenda at all - at all," Sean said. "He just wanted us to be successful and happy."

After the cancer diagnosis, the optimism that had been a hallmark of his personality became even more important. He never let his cancer get him down, Megan said.

Three weeks before he died he was able to travel to Florida to play golf with a group of friends. He got a hole in one - just as he had the week before receiving the grim news.

"His cancer was bracketed by holes in one and we both feel like it was a sprinkling from God," Megan said.

Tom's love of golf was eclipsed only by his love of scuba diving.

"As much as he loves golf, when he goes to a place you can scuba dive, he tables golf," Megan said.

Sean, a senior at Indiana University, said diving was their favorite shared activity and estimated the two had done 60 dives together. Any troubles on land or on the boat traveling to the site evaporate, Sean noted.

"It's just silent," he continued. "All you can do is look at how beautiful everything is."

His favorite diving trip was to the Galapagos Islands to celebrate his high school graduation.

"It was just spectacular," Sean said.

As he and other seniors at Indiana University prepare for life after college, Sean has realized just how much great advice his dad has given him about networking, preparing for interviews and so many other topics.

"I've got a lot to share and it's straight out of my dad's mind," Sean said. "It's something he ingrained in me."

Tom was a man who was always learning and sharing knowledge with others, neighborhood friend Lee Matricaria said. Tom also was someone who wanted to be part of the process, Matricaria noted, pointing to his work as a board member and mentor with Greenhouse Scholars.

"It's easy for us all to write a check and go that route when you support an organization," he said. "Tom took that to the next level and got involved.

"To me, when you show up and you roll up your sleeves and you're involved, that speaks to character and who you are," he added.

A memorial bench honoring Tom now sits in Burns Field, thanks to the many people in the neighborhood who cared about him, Matricaria said.

"He had friends of all ages. He was deeply loved," he said.

At a memorial golf outing Tom's friends organized this summer at Chicago Highlands Club in Westchester - where Tom was like the mayor, Megan said - person after person shared stories of Tom's kindness.