Homecoming makes a comeback at Central

Week of activities back in full swing after pandemic, weather interfered with event 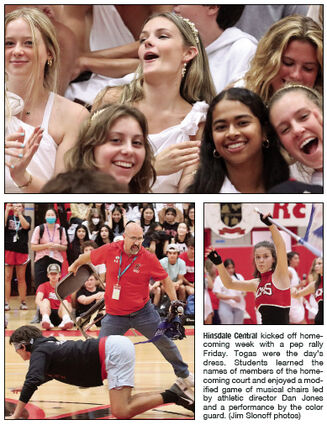 Organizers hope this year's Hinsdale Central Homecoming is bigger and better than ever.

After homecoming was canceled two years ago due to COVID-19 and the outdoor dance planned for last year had to be moved inside, it's time to boost school spirit and get back to an epic experience, the juniors planning this year's event said.

"This year we're trying to go all out because we want students to get involved again," said Emma Gayton, one of three Varsity Club members serving as Homecoming co-chairs.

This year's theme, Carnival Central, was the idea Elena Koulouris presented in order to gain a seat on the club's executive board.

"When I first came up with the idea, I thought it wouldn't actually become the dance (theme) - it was just an idea," Koulouris said. "Seeing an idea become an actual event is pretty cool."

The carnival theme lends itself to the activities planned for Spirit Week this week. Students have been able to participate in a pie-eating contest and play carnival games during lunch hours and dress up for a different theme each day.

Gayton was most looking forward to Tuesday's dress day, "Anything But a Backpack." A similar dress day was held last year.

"It was amazing. People would bring sleds, they brought microwaves. It's actually the spirit day that people participated in the most," she said.

Koulouris was excited for the custom-made tattoos that would be available Wednesday before school and the face painting during lunch on Friday.

"I just like the idea of putting tattoos of Red Devil Nation on to show your school spirit," Koulouris said.

Anjika Kumar, the third co-chair, said she's most excited about participating in the parade Saturday morning and throwing candy to the kids along the route, as she did last year.

"I just love seeing everyone's reaction and even the parents," she said. "I just love to see all the different kinds of floats."

Several clubs will participate, and with the homecoming game on Friday night again this year, football players also can be in the parade.

The 20 students on the homecoming court were announced at a pep rally last Friday.

The entire school - students of all grade levels, teachers and faculty - will vote for the top two to be crowned as homecoming royalty at a pep rally tomorrow, said Janelle Hoeksema, who serves with Maria Cotter as Varsity Club's faculty sponsors.

"We're really just looking at who are the top two seniors that we feel best represented Hinsdale Central as a leader," Hoeksema said.

Planners worked to create an entire week of activities to get students involved, Kumar said.

"We tried to make the week a lot more exciting so it's not one day and then it's completely over," she said. "It's a whole week."

But the dance has not been overlooked. In addition to a DJ, Varsity Club is bringing in a band called Hey Jimmy.

"I think it's going to be really exciting his year. A DJ and a band are really different," Gayton said.

Dance tickets include an ice cream treat and cotton candy, and students will enjoy multiple photo booths - including a 360 one - a balloon twister, a caricature artist and carnival games.

Hoeksema and Cotter have enjoyed watching the three plan the event and blossom into awesome leaders. They also are excited to see students and the community participate.

"We so excited to be able to start doing these things again and having the community involved," Cotter said.

The procession starts at the senior parking lot and proceeds north on Grant, east on Seventh, north on Garfield, west on First and then south on Grant back to Central.