Show has right mix of acting for Central thespian 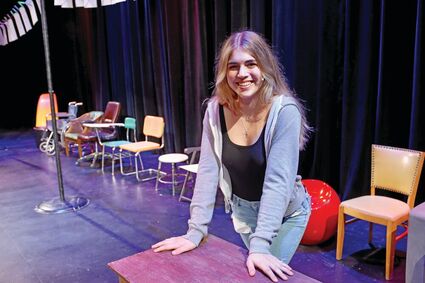 Preparing for the Hinsdale Central Drama's upcoming production of "Too Much Light Makes the Baby Go Blind" has been a departure for theater veteran Julianna Wittrock.

"It's 30 plays in 60 minutes, ranging (across) all different genres," the senior said.

They range from the whimsical, like the importance of hands, to the unsettling or philosophical.

"I do one about wanting to shake my child to death," Wittrock related. "And I get to talk about the lyrics to 'Crank That' by Soulja Boy.' "

In addition to the unusually fast-paced format, Wittrock said the production is also fun - and challenging - because each night's audience gets to choose the play list order.

"I have to always be ready for my plays, my monologue because it could come next, I don't know. Every show is different," she said. "And since cast members are in different plays, you're not rehearsing with them every day. You can't work off them for cues, you have to memorize your lines."

Part of the drama club since freshman year, Wittrock has trouble believing that this year is her final run.

"It went by so quick," she said, recalling her first play as a freshman, "The Women of Lockerbie," set in the aftermath of the 1998 terrorist airplane bombing in the skies above the Scottish town.

"It was all about us wanting to wash the clothes of the victims of that terrorist attack. It was a really moving show," Wittrock said.

"As I live life, I have new experiences that I can use in my acting, things where I can say, 'This is what makes me feel happy, and I can relate to this for this character,' " she commented.

Wittrock said she caught the acting bug in middle school.

"It was really like an escape for me, being able to go to rehearsal after school every day, seeing the same people and doing what I like," she said. "I get to put on a different persona that I would in day to day life, which is really nice."

She found performing in "The Laramie Project" last year particularly "impactful" in its dealing with issues concerning the LGBTQ community. And she also had the opportunity to serve as assistant director for the freshman production of "The Jungle Book."

For Wittrock, the curtain on her acting career will not close at high school graduation.

"When I go to college, I'm thinking about minoring in theater, if I don't double major in theater," she said.

Until then, she's going to make the most of last tour as a Red Devil.

"I'm excited to go to football games because I didn't really get to go the last few years," she said. "And Toga Day. And prom."