Central teams are falling into place 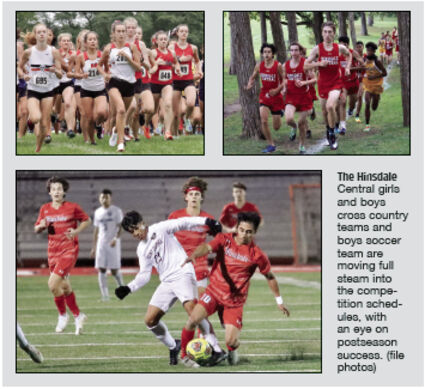 The Red Devils are off and running (and passing, shooting, etc.). The fall season of high school sports has begun, and to begin our three-part series on Hinsdale Central's teams we, ask coaches of boys and girls cross country and boys soccer to assess their squads. The series will continue in the Sept. 8 and 15 issues.

Team strengths: We're definitely senior heavy, so we've got a lot of experience, which is a nice thing to have. They've been through some big moments and have a good amount of varsity experience, so that's a positive this year.

Areas for growth: Just getting those big race experiences and learning how to manage that and putting yourself in a position to compete and not letting nerves or competitors deter what you can do.

Who to watch: Seniors Dan Watcke, Aidan Bandukwala, Michael Skora, Kyle Doorhy and Jesse Gamboa are some of the veterans who have been leaders for this program and to whom we're looking to kind of lead us again.

Season goal: That the program and varsity team is better at the end of the season campaign than we were at the beginning, and that the teams members all improved from the very early stages to the very end. If we accomplish that, no matter where we finish at the end, we can feel that we did our job. Every year's different, but that's the goal.

Team strengths: We have a strong upfront presence with our top runners. It's very close-knit group, and the seniors have done a great job of learning from those that came before them. This is a team that really buys into that idea of the team. We say our diversity is our strength, but our unity is our power.

Areas for growth: We're just stressing the same thing we did a year ago: everybody will be treated fairly, but that doesn't' mean they're going to be treated exactly the same. That can be hard for kids to grasp at first when they're racing one week but not the next. We're going to be work in progress, but it's coming along a little more quickly than last year, which is good.

Who to watch: I think you're going to see seniors Catie McCabe and Sarah Fischer near the front of most of the races we run. Gabbie Thanos was our fourth best runner at state last year as a freshman. She was injured during the spring track season and is just rounding into shape. Senior Sarah Skora is also getting healthy. Juniors Camden Griffin, Pola Dygon and Kennedy Boyd, senior Mai-Jeanna Sakho, and freshmen Addie Krogstie and Lucy Kusak will be battling for

Season outlook: This could be a very special year. We'll be in the mix at state, but our primary goal is to be the best we can be, and the rest will take care of itself. Our conference is the toughest in the state. The team is tasked with carrying on the program's tradition of success, and they really take that to heart.

Team strengths: We have 16 seniors, so that's a really strong foundation to have players who want to lead and come out and work hard in their last year in the program. Every day the team has come out, they've been extremely motivated and they really seem to show enjoyment in playing. The players are all extremely committed and hardworking.

Areas for growth: We talk about biggest game, biggest moment. It's really about are we putting the kids in the position to compete with the very best, and are we seeing the benefits from coming out every day and working hard both on and off the field? We just want to be able to compete. When you bring everybody together for a three-month season, we have to figure out what does it look like as a group playing together and make sure individually and collectively as a group we're moving forward in the right direction going into late October and early November.

Who to watch: On defense, we return senior goalkeeper Henrique Ribeiro and senior defender Kevin Gottschalk. Senior midfielder Dayton DiTomasso is a very versatile player. Junior forward Luca Davies scored the goal in our first game, and junior Martin Montoya returns in the midfield and has a very creative attacking mindset.

Season outlook: Last year we won our 14th conference championship in the 50-year history of the program, and we hope to compete for a conference championship again. We know that we're in the toughest conference in the state of Illinois - both the West Suburban Silver and Gold - and we want to position ourselves to make a strong run in the playoffs and peak at the right time and compete with the best locally, regionally and nationally. Through teachable moments, we set in motion our expectations.