Time to act up 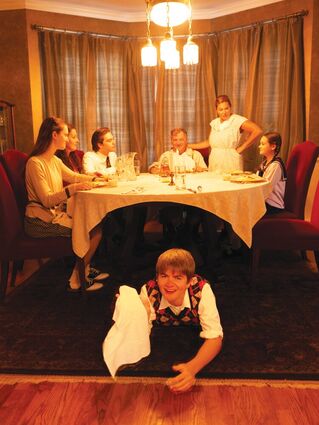 The Theater of Western Springs' staging of Neil Simon's "Brighton Beach Memoirs" is one of several 2022-23 season-opening productions as local playhouses look forward to a full year of in-person performances following the pandemic disruption. (photo provided)

The curtain soon will open on a new slate of productions lined up by area theaters aimed at tantalizing drama enthusiasts. Here are the offerings to lead off the season, and the time to enjoy and support live performances has never been so captivating.

Considered the first play in Simon's semi-autobiographical Eugene Trilogy with "Biloxi Blues" and "Broadway Bound," the comedy follows teenager Eugene Jerome as he pursues his dreams of becoming a successful comedy writer while dealing with the conflicts of his squabbling family.

Director Karen Holbert said she is delighted to present this work to TWS audiences.

"I am a fan of Neil Simon but I feel like sometimes he doesn't get the critical accolades he deserves," she said. "It's my favorite type of script: It made me laugh out loud and also shed a few tears."

Despite its setting nearly 90 years ago, Holbert said the play touches on issues relevant today.

"It's about the importance of family in both good and bad times, and wanting independence but also wanting to belong," she said. "We all can relate to the trials and tribulations of the family, told with a lot of humor and empathy."

In a special collaborative effort, Holbert noted, half of the cast are adult theater members and the other half are from the children's program.

"It's been so rewarding to take advantage of all the resources under our roof," she said.

Tickets are $25 for adults and $12 for children and students. Visit https://theatreofwesternsprings.com or call the box

The Drury Lane Theatre in Oakbrook Terrace kicks off its 2022-23 lineup of productions with Agatha Christie's whodunit "Murder on the Orient Express."

Just after midnight, a snowdrift stops the Orient Express in its tracks. The next morning, an American tycoon lies dead in his compartment, stabbed, his door locked from the inside. Isolated with a killer in their midst, the passengers rely on famed detective Hercule Poirot to identify the murderer before they strike again.

Tickets range from $69 to $84; seniors receive a $5 discount on Wednesday and Thursday matinées. Dining and show packages are available.

Hinsdale Central drama members will begin the year - literally as it's the first week of school - with their presentation of "Too Much Light Makes the Baby Go Blind: 30 Plays in 60 Minutes" by Greg Allen.

Director and drama club sponsor Susie Jaffe said the fast-paced work has been performed in Chicago by the Neo-Futurists for the last 25 years.

"It's experimental theater made up of short skits - some serious, some strange, some hilarious," Jaffe explained. "The audience picks the order of the skits each night by shouting from a menu of pieces, so there's an element of improv and surprise each night."

"We have a group of 12 kids that have been working on this all summer," she added.

Inspired by Lorraine Hansberry's "A Raisin In The Sun," this comedy/drama is set in the same house in the suburbs of Chicago. Act One takes place in 1959 when Russ and Bev are moving to the suburbs and selling their home to the neighborhood's first black family. Act Two is 50 years later as a young white couple buys the same property with plans to demolish and build a larger home. Now a predominately black community battles to protect the historic qualities of the community in the face of gentrification.