From guarding to coaching to managing, employees learn skills that outlast summer 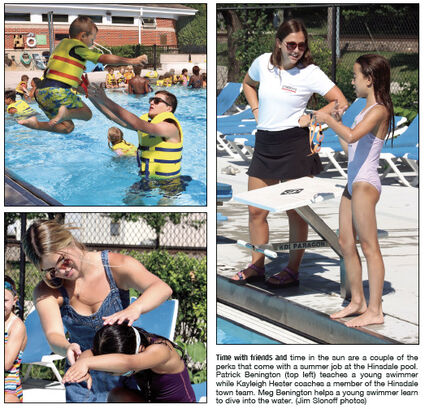 For many people, the Hinsdale pool is a place to cool off and hang out during the hottest days of summer. For Kayleigh Hester, Luke Leddy and the rest of the staff at the local pool, it's that and so much more.

Although he enjoyed visiting the pool as a child, Leddy said he never thought of himself as much of a swimmer. So when the opportunity arose several summers ago to become a lifeguard at the Hinsdale pool, he initially questioned whether it would be a good fit.

Leddy trained to be a lifeguard and spent two summers in the guard chair before taking on more responsibility as a head guard. In his fifth summer at the pool, he was promoted to manager - a position he retained during his sixth and final summer at the pool this year.

"I was basically in charge of the whole pool," Leddy said. Along with two co-managers, he was responsible for keeping the pool's chemicals in balance, compiling financial reports, opening and closing the pool and basically seeing that all ran smoothly. If a fellow employee or pool guest suffered a bee sting, scraped knee or nose bleed, Leddy was always prepared to provide the necessary first aid and get further help if needed.

Like most jobs at the pool, the job of manager is relatively easy - until it's not, Leddy said. As was true in his lifeguard days, the job of manager required Leddy to be ready to respond to an emergency, large or small, at any moment. That's something that Leddy will take with him, and something he's already put to use outside of the pool.

While visiting New Mexico this summer for a rocket launch with fellow aerospace engineering students from the University of Illinois, Leddy said he noticed signs of heat exhaustion in his classmates and took immediate steps to avoid

"It's a lot of responsibility," Leddy said of his job at the Hinsdale pool. But it also allowed him time with friends and opportunities to make new friends and earn money along the way.

"There was always a positive atmosphere at the pool," Leddy said.

Hester has been hanging out at the pool every summer since she can remember.

"I swam all throughout my life. The pool has always been a big part of my life," she said.

A former member of the town team, she spent this summer coaching young competitors and teaching beginners the basics of getting around in the pool as a swim instructor.

Her dual role as coach and instructor required her to attend practices four times a week and two swim meets each week, some of which took place on weekends. She also made time to teach private lessons throughout the week and to squeeze in some babysitting jobs along the way.

Hester said the transition from swimmer to lifeguard to instructor seemed natural, and not only because of her experience in the water. Hester's mom and aunts all worked at the Hinsdale pool as teenagers.

Now a senior at the University of Illinois, Hester said she has just one summer left to work at the pool before embarking on a career outside of the water. But like her work at the pool, Hester's new job likely will involve working with children as she pursues a career in speech language pathology.

Throughout her time at the pool, Hester said she had her eye on the position of swim team coach. When it became available this summer, she jumped at the opportunity.

Hester said seeing her students and team members become better swimmers is rewarding, but that's not all she takes away from her job each day. She said she also enjoys seeing friendships form between the swimmers on her team - friendships that just might last a lifetime.

"I really had a lot of fun every day," Hester said.

With school back in session, Hester's poolside days are over for a while. But she takes a summer full of memories and at least one other thing with her as she heads back to class.