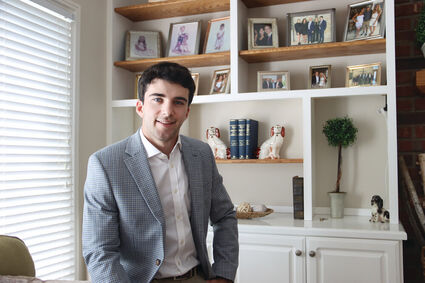 Hinsdale native and Duke University junior David Gust cut his policy-shaping teeth in the Beltway as one of nine college students selected for a DeJoy-Wos Family Foundation Scholarship to attend eight weeks of programs with The Fund for American Studies. The double major in economics and public policy also interned at the American Enterprise Institute, a public policy think tank.

"I like the idea that you can change the world through political theory," said Gust, citing Ayn Rand and Milton Friedman among his early influences.

The scholarship provided full tuition as well as a housing allowance, enabling him to line up the internship with the center-right-leaning AEI. As president of the The Ciceronian Society, a student forum for political discussion, Gust had hosted speakers from AEI on campus.

"They were the top think tank I wanted to work at," Gust said.

He was exposed to issues from agriculture to technology, learning what it takes to advance a position. He also saw citizen activism at the Supreme Court on June 24 after the decision overturning Roe v. Wade was issued.

"It was a lot calmer than you would think," he remarked.

Expecting to bear witness to the legislative might of the high-profile elected representatives, Gust said he was struck by the integral role played in the development of the nation's laws by wonks at organizations such as AEI and others as well as Congressional staffers.

That's not to say he didn't have his encounters with Washington's well-known, like Sen. Mitt Romney and the current Senate majority leader.

"I went to a dinner with Mitch McConnell," he said. "I went to a bi-partisanship dinners where they were recognizing people on the both the right and the left."

Gust observed that, despite D.C. being a city of more than 700,000, the federal government orbit

"I'm shocked by how much everybody knew each other," he said. "You're in a big town, but all the political people generally know each other."

Gust's fascination with politics was sparked by the Trump-Clinton presidential race in 2016.

"I began reading a lot of political theory," he said.

He envisions serving in the military or enrolling in law school after college. He'd possibly a run for office one day, but he'd need the financial means first.

"If you don't have money, you end up bowing down to people you don't want to bow down to," he said. "Above all, what I look for in a job is that you can go home feeling fulfilled at the

Despite the divisions pulling at the fabric of our Union, Gust remains hopeful.

"I think that at the end of the day, people get along, people are happy and people should be bullish about the future of our country," he said.