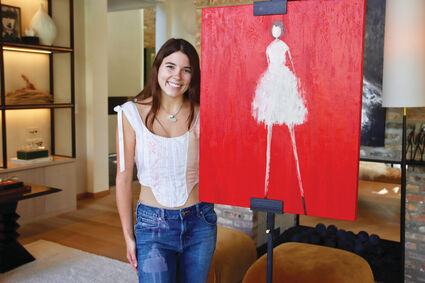 Laux's advice to other young artists is to remain open to opportunities, which can happen anywhere at any time - even in your own living room. (Jim Slonoff photo)

When preparing to venture outside the house, people will often remind one another that "it's not a fashion show." That statement doesn't apply to Donovan Laux of Hinsdale. For this budding fashion designer, every location is a runway, and every person is a model.

Laux said her fascination with fashion began long ago as she watched her mother and three older sisters purchase clothing and put together outfits.

She said her home was full of creative energy and confidence, both of which rubbed off on Laux, a 21-year-old fashion design student at the School of the Art Institute.

As a high school student at St. Ignatius in Chicago, Laux became known for her unique style, which often involved upcycling old jeans into new, creative pieces. Meanwhile, she drew inspiration from what others were wearing.

"I would walk around the mall like it was a zoo," said Laux, taking in each shopper's choices in clothing and accessories and always looking for new ideas to add to her own wardrobe.

For Laux, clothes aren't just items meant to cover the body. Her unique designs often double as art, which made the Zolla/Lieberman Gallery in Chicago an appropriate venue for the debut of her latest creations. The runway show took place July 16 in collaboration with North Shore artist René Romero Schuler's exhibit "Reflection."

Laux said the opportunity to showcase the 12 looks in her clothing line resulted from an encounter with the artist at Laux's Hinsdale home. Laux's mother had purchased a painting from Romero Schuler, who wanted to see the piece in its new setting. A rack of Laux's designs piqued Romero Schuler's interest, she said, and a partnership materialized.

"I've definitely learned a lot about being an artist from René," said Laux, who screenprinted Romeo Schuler's work onto some of her designs.

Laux said her own wardrobe reflects the looks she creates as a designer. They are often a mix of new and old, purchased items and her own creations.

"I'm creating my own wonderland of fashion," said Laux, who described her style as eclectic and expressive. "It's really just based on how I feel like expressing myself that day."

She revealed her one rule when it comes to choosing an outfit.

"I never step out in something that I'm not excited to be wearing," Laux remarked.

She hopes her designs inspire others to express themselves through what they wear.

"Try something new, even if you've never seen anyone else do it," said Laux, who is helping people to find their own unique looks through her own distinctive designs.

"I do a lot of sales on my Instagram page," at donovanjordanaux, she said.

While she creates custom designs, Laux also has an inventory of ready-to-wear pieces available.

"I'm really open to working in different aspects of the fashion industry," she said of life after graduation.

Until then, she's content selling one piece at a time while also learning new skills and techniques, expanding her understanding of the fashion industry, and taking every chance to further her craft along the way.