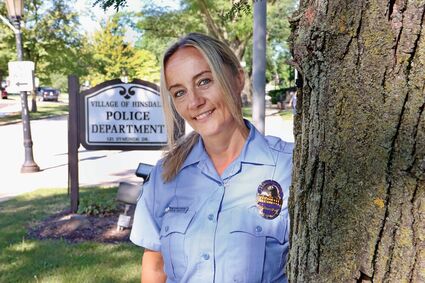 There's no such thing as a typical day in the life of Nina Szaflarski, administrative services analyst at the Hinsdale Police Department.

"Whatever comes up, I go with it," said Szaflarski, who joined the police department as a part-time clerk nearly seven years ago. In those seven years she has learned many new skills and put old ones to use.

A former Palos Hills police officer, Szaflarski knows the job of the officers she supports.

Szaflarski said she left the Palos Hills Police Department to spend several years raising her two sons, now 16 and 13. She started working just two days a week at Hinsdale and worked her way up to her current position.

"I kind of dove in and tried to do new things," she said.

Szaflarski's work supports Chief Brian King and the rest of the department's staff. She keeps track of required training, sees that the bills are paid and handles the mail, among many other things.

The police department's hiring process takes place every two years. From the initial posting to hiring, Szaflarski organizes and oversees the process.

Vehicle repairs and hiring duties also are on Szaflarski's to-do list as administrative services analyst. When a squad car needs maintenance or repair, Szaflarski sees that it's taken care of with as little disruption as possible.

But her job goes beyond clerical work. A certified evidence technician, Szaflarski is qualified to pitch in if the department needs help at a crime scene.

Szaflarski also is trained to help parents, grandparents and other drivers properly install child car seats. She reserves most Wednesday mornings for car seat inspections, about 80 percent of which reveal a problem, Szaflarski said.

"Summer seems to be a little busier time," she said, perhaps due to visits from young friends and relatives.

Anyone with a child car seat can schedule a free inspection by emailing Szaflarski at [email protected] Before assuming her current position, Szaflarski spent time as a community service officer in Hinsdale, a job that included traffic control, parking enforcement and other nonemergency calls.

"I've always wanted to be in the community service field," Szaflarski said. She said she enjoys serving the people of Hinsdale and working with her fellow members of the department.

Szaflarski said she enjoys learning new skills and is always willing to take on a new challenge or pitch in wherever she's needed.

"I look forward to coming to work," she said, and learning from her fellow village employees.

And while her uniform is now a different color and she wears a different badge, Szaflarski said her dedication to the community and the police department remains her driving force.