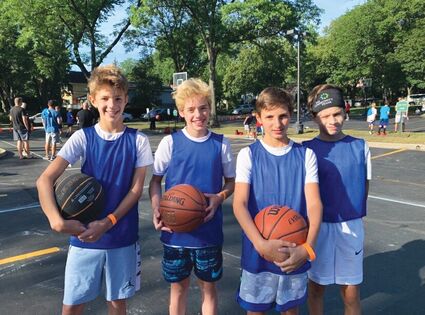 Hundreds of basketball players are expected to test their skills, challenge their opponents and have some fun at the 3-on-3 tournament at The Community House in Hinsdale Saturday, Aug. 13. The annual event raises money to support youth programming at The Community House while offering basketball players and their fans a fun way to spend a Saturday.

"It's really a fun atmosphere," said Amy Velco, whose sons Hayden and Hunter will be on the courts for this year's tournament. The Velco brothers make up half of the Hinsdale Hustlers team, which also includes eighth-graders Brady Gustafson and Hudson Kurcz. Hayden, also an eighth-grader, met friends Brady and Hudson in kindergarten and have played basketball together for years. Rounding out the Hustlers roster is Hayden's younger brother Hunter, who will be a seventh-grader this year.

All four have played in the tournament before, and all four said they expect to improve on previous performances this year.

Hayden Velco said he's looking forward to testing his skills against other players his age.

"I just want to get better and play against other kids that might be better than me," said Hayden, who also plays in the LockDown Chicago spring travel league.

The Hinsdale Hustlers are one of about 70 teams registered for this year's event, said Kelci Bednar, recreation and athletics supervisor at The Community House. Teams of three or four players compete against other teams in several age brackets. Each team is guaranteed to play at least two games, with the chance to win prizes.

More teams not only means more competition for the players, but more money for The Community House.

"All of the money comes right back into the recreation department,"

Proceeds from the 3-on-3 tourney help The Community House to expand its programming and to offer it to families who are unable to afford activities like summer camp, flag football or any of the dozens of programs offered.

Spectators are welcome to watch the games, which begin at 8:30 a.m. and continue throughout the day as parking lots and tennis courts at and around The Community House are temporarily transformed into basketball courts. Between games, players and their families and fans can enjoy snacks and drinks from the concession stand.

A popular part of the day, Bednar said the three-point contest allows players in three age divisions 30 seconds to sink as many balls as possible from the three-point line. Contestants can register prior to the tournament or on tournament day.

The Hustlers weren't crowned the champions last year, but team member Hudson went away a winner. Hudson threw the ceremonial opening free throw and sank it, winning admission to as many Breakaway basketball camps as he wanted to attend in the last year.

"I went to a lot of them," Hudson said. The camps, along with a whole lot of practice with his friends, mean the Hinsdale Hustlers are prepared to take on the competition, and for a good time.

"It's such a fun event," Brady said, and the fact that the day doubles as a way to help other kids enjoy The Community House makes it even better.