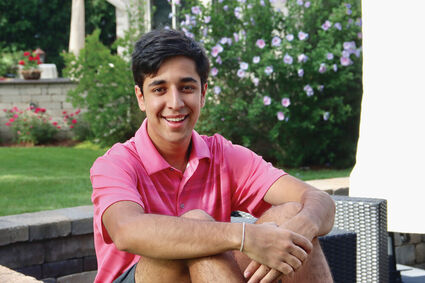 Each summer the Bank of America Student Leaders program chooses 300 high school juniors and seniors from across the country to gain leadership experience and develop skills while working with a nonprofit organization close to home.

This summer, Sahan Sahgal of Hinsdale was among those 300 and one of five Chicago-area teens to embark on the eight-week endeavor.

"I'm committed to helping out and giving back to my community," said Sahgal, who was introduced to the program by a family friend who had participated.

The chance to serve his community and gain leadership skills while also making some money appealed to Sahgal, who will be a senior at Hinsdale Central High School this year. Students in the program participate in a paid internship, which includes instruction in basic personal finance skills, thanks to the financial experts at Bank of America.

"For some, this is their first job," Sahgal said.

Although he's had jobs before, he said he welcomed a refresher on how to properly handle his money.

Each student leader is paired with a local nonprofit organization. Sahgal spent his summer working at Glen Ellyn-based Bridge Communities, which helps people transition from homelessness or home insecurity to permanent housing.

"A lot of them are doubled up with family members or couch surfing," Sahgal said of those helped by Bridge Communities. Many, he said, are single mothers.

Sahgal said he was aware of the issue of homelessness in DuPage County, but was surprised to learn of its prevalence and the work of Bridge Communities.

"I didn't realize the magnitude," he said.

During the two-month program, Sahgal said he worked in many areas of the organization but focused much of his time on development and fundraising events. He worked on the Backyard Barbecue, coming up in September, and Sleep Out Saturday, which happens each November.

"Those are our two biggest events," he said.

In an effort to attract attention from his own generation, Sahgal created a TikTok account to promote Sleep Out Saturday.

"Our generation can make a big difference," said Sahgal, who volunteers at HCS Family Services in addition to his work on The Community House Junior Board.

At Bridge Communities, Sahgal also honed his skills in Excel while working on a capital expenditure project. Sahgal said his increased confidence in using the software will serve him well into the future, as will the social interaction and leadership lessons he learned along the way.

"I've gotten to view and experience a really amazing leadership team," he said of the Bridge Communities staff. He said he was impressed with how the organization capitalizes on each person's strengths and talents to create a cohesive and empowered team.

Sahgal's summer experience ended with a virtual leadership summit that included opportunities to engage with congressional leaders, hear from leaders in civil and human rights and participate in the Stanford University Young Democracy at Home program, which encourages conversation about issues facing young people today.

As Sahgal weighs his options for college and a future career, he knows one thing for certain.

"I'm insistent that my career involves giving back to those in need," he said.

No amount of money, Sahgal said, can equal the feeling and satisfaction that he gains from serving his community.